AFI Top 100 Discussion is a series of posts dedicated to dialogues concerning the best of American Cinema as designated by the American Film Institute. Jon Harrison of A Cinematic Odyssey and I have been picking our way through the list since 2014, having covered five films so far. Today we are discussing the 1962 classic that won Gregory Peck his Oscar: To Kill a Mockingbird. 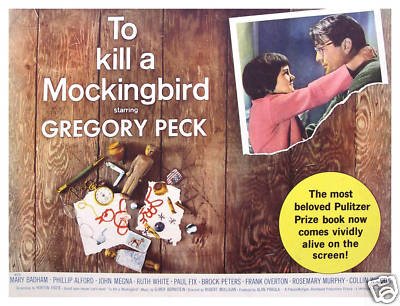 Today on AFI Top 100 Discussion, we’re delving into Robert Mulligan’s 1962 adaptation of Harper Lee’s celebrated novel, To Kill a Mockingbird. Starring Gregory Peck in an Oscar-winning role, the film tells the story of young Scout’s (Mary Badham) childhood in Maycomb, Alabama, witnessing her lawyer father, Atticus Finch (Peck) defending Tom Robinson (Brock Peters), a young black man accused of raping a white woman. AFI saw fit to place this film at #25 on its list of 100; join us as we discuss racism, Gregory Peck, and the lack of Paul Thomas Anderson. For those following along at home, the film is available to stream currently on Netflix.

Hunter: So obviously To Kill a Mockingbird is a powerful story that brings a lot of associations with it. Not only does it deal with the Great Depression and coming of age, but it also deals with the giant subject of racism. I really loved this book as a kid when I read it in high school, but seeing the movie now really has me wishing they handled the story of Tom Robinson a lot better. The film, perhaps more so than the book (though I haven’t read it in years), seems more interested in glorifying Atticus Finch’s quest to do the right thing by the law rather than granting any of the African American characters personhood. I was just wondering how you responding to this while watching the film. 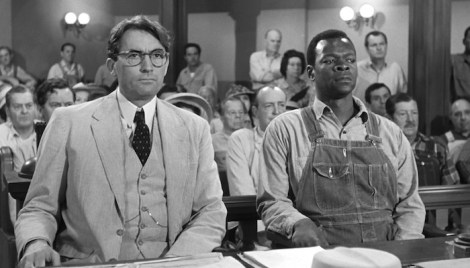 Jon: You know I couldn’t quite put my finger on what was bothering me a lot with this film when I first watched it, until I read Roger Ebert’s 2.5/4 star review of To Kill a Mockingbird; so i’m glad you brought this up first. That clearly is the film’s only interest in glorifying Atticus Finch, and I mean I love his character and what he represents, but 99% of the African American’s in this film are just filler characters, borderline props. I didn’t live in the 1930s, but if a white man came onto my land after a fellow African American was unlawfully murdered by the police, and then this white man has the audacity to call me or a friend “boy”, there is no way we aren’t going to be fighting, but in this movie, these characters just roll with the punches to progress the plot forward to Finch doing things by the law.

Hunter: What is the most disappointing is that the African Americans that are in the film don’t really become characters. Tom Robinson has that one moment on the stand and that’s it. I wish we could have seen him participating in his own defense a bit more. To my memory, the book does a slightly better job with this, but that’s probably only because it is longer (as it’s a novel) and it is more rooted in Scout’s perspective. Therefore it doesn’t seem as strange that we never get to know Tom Robinson at all. Lee in the novel does a slightly better job at developing the maid, Calpurnia, as well.

That was another thing I really missed from the book. I see why they cut this stuff out for time, but a lot of what really resonated with me from the novel was Scout’s coming of age and wanting to be someone that society in the ‘30s didn’t want her to be. We get a bit of it here, people making her wear dresses and such, but they cut a lot of her female influences out of the film. Mrs. Dubose is only in it for one scene and then never revisited, same with Miss Maudie, and Aunt Alexandra is cut out of it entirely. Totally understandable, but I think this film trades on the feminism in the book just as much as the racism.

Jon: That’s interesting to hear the differences between the novel and the film, I read the book in high school as well but I don’t remember it too well. I could be wrong but these older films usually don’t have running times over 2hrs and 30 minutes but perhaps this film could have benefited from adding in more character development for all these characters you mentioned?

Another problem for me was how the first film felt like it was heavily focused on Scout’s coming of age, and then it completely switched to Atticus on the second half of the film, which is by no means bad but it felt off balanced for me, I would have preferred a film strictly on her coming of age, or a whole film dedicated to the trail on Tom Robinson, funny thing is this film had me wanting to just watch Anatomy for a Murder instead.

Hunter: I don’t want to harp on the differences between the novel and the film, but with a story this famous it’s hard not to. Especially when I feel the film comes up significantly short. I agree that the transitions between the various thematic elements of the film could be a lot smoother. Besides having the weird point of view shifts between Scout and Atticus, you also like almost completely forget about Boo Radley until he shows up at the end of the movie and you’re like oh yeah…. He’s in this movie. So while I think they should try to keep as many of the novel’s themes in the film as possible, they either needed a better script or a better director to be able to transition between them.

It’s interesting you bring up Anatomy of a Murder, because that film from 1959 feels a lot more transgressive than this film even though they both deal with a rape trial. I feel as if Preminger always knows how to point out how provocative his material is, though to be fair I don’t think that’s what Mulligan’s going for. This seems like a very safe studio picture, even though it’s trying to deal with racism and rape and all this stuff Hollywood films of that time tended to shy away from. That’s what really bothers me most about this film, it feels like stodgy Oscar bait to me. Everything from the acting to the very very artificial sets screams “this is a socially important movie from 1962” to me. 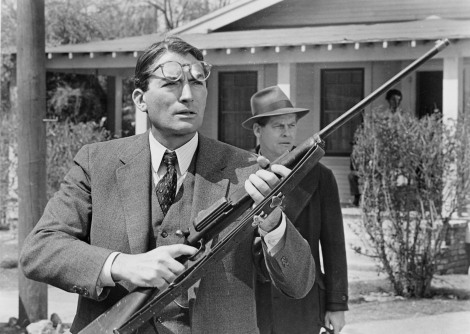 Jon: I agree with you fully, could you imagine a 2016 To Kill a Mockingbird, the trailer would be incredibly hammy, and probably receive all the Oscar nominations. I appreciate that this film was made and that Mulligan took on the project but overall it is disappointing that they played it safe. I’m curious to know how why this film is universally loved, and how it’s ranked so highly on the AFI Top 100 list.

Hunter: As long as we’re talking Oscars, how do you feel about Peck’s performance and Oscar win? I feel as if it’s one of his better performances, but then again Peck’s not one of my favorite actors in the first place. I feel he comes across as stiff most of the time, and he’s just way less stiff here than in most of his other roles. I’ve only really liked him in this, Duel in the Sun (where his stiffness works for him), and his hilarious cameo in the Cape Fear remake. Of course I’m biased though, as he beat out my boy Peter O’Toole for Lawrence of Arabia that year.

Jon: Well I think it’s safe to say that The Academy and myself completely took the Oscar bait here because Peck’s acting is indeed stiff but the role he played here is one a person loves to root for.

Hunter: Don’t get me wrong, I think Peck does a good job, but Oscar over Peter O’Toole? He’s not that good. The nature of the character definitely gives him the edge for sure, also the fact that he’s been around Hollywood forever and Peter O’Toole is not really anyone at this point in his career.

I have a feeling that I know where this is going to go, but do you think it deserves its place at #25 on this list? For context, it falls between #24 ET and #26 Mr. Smith Goes to Washington. I don’t think it’s in the league of either of those films.

Jon: Let’s take a shot for every movie below To Kill a Mockingbird that could have been above it.. I almost don’t even feel like To Kill a Mockingbird should be on the list if it’s going to be above #39 Dr. Strangelove, #48 Rear Window, and #52 Taxi Driver. They really must have been drunk while creating this list. How are you feeling about it’s placement Hunter?

Hunter: I feel as if this is the first time with any of the films we’ve discussed where I would straight up remove it from the list. There are any number of deserving films that could be there instead, like basically anything by Paul Thomas Anderson. That’s a whole other discussion though.

Jon: If it were ever possible I would love a To Kill a Mockingbird remake by Paul Thomas Anderson, with Daniel-Day Lewis as Atticus Finch, now that would be Oscar worthy.

And on that intriguing note, we end our mostly unfavorable discussion of 1962’s To Kill a Mockingbird. This is really the first time we’ve both strongly advocated that a film be removed from AFI’s list, though clearly a lot of people feel strongly the other way. Are you one of them? Please let us know what you though of To Kill a Mockingbird, its treatment of racism, Gregory Peck’s performance, or its placement on the list.

“You never really understand a person until you consider things from his point of view… Until you climb inside of his skin and walk around in it.”

2 responses to “AFI Top 100 Discussion: To Kill a Mockingbird”