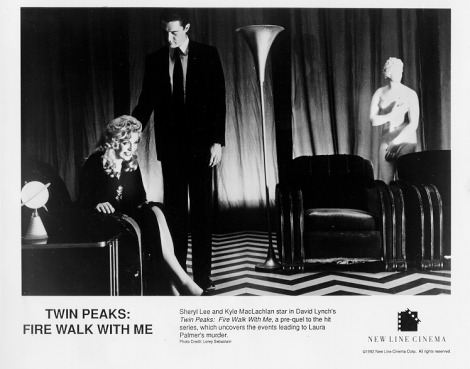 With all this talk about Twin Peaks coming back for a third season after 25 years, I decided to give the prequel film another look. I had been planning to do this anyway, as I rewatched the series over the summer, but when I heard the news this past Monday I moved my plans up a bit. Fire Walk with Me was much maligned on its first release, though I think unfairly. While it is not the best Lynch has ever done and departs drastically from the tone of the show, it offers as good a look into Lynch’s philosophy as any of his films.

Note: this review contains spoilers for the TV series, and I suppose for the film as well (though if you’ve seen the show you basically know what’s going to happen here)

The film is divided into two parts. The first focuses on the FBI’s investigation into the murder of Teresa Banks, while the second focuses on the last days of Laura Palmer’s (Sheryl Lee) life. The investigation rounds up familiar faces Gordon Cole (David Lynch), Agent Cooper (Kyle MacLachlan), and Albert Rosenfeld (Miguel Ferrar). As welcome as that is, for the most part we are following around these two new guys, Agent Chester Desmond (Chris Isaak) and Sam Stanley (Kiefer Sutherland). They snoop around Teresa Banks’ trailer park, and question the manager (Harry Dean Stanton). This basically turns up nothing and Coop follows their line of questioning later, only to disappear. David Bowie, playing another FBI agent, mysteriously appears and disappears. This portion of the film really doesn’t make much sense, or relate to anything at all, but wait about half an hour to forty five minutes and the actual story will start.

As I said, the second half is far more interesting and involving. We see how Laura was addicted to cocaine, how she was seeing Bobby Briggs (Dana Ashbrook) and James Hurley (James Marshall) at the same time, her relationship with Donna (Moira Kelly), and most importantly, how she comes to realize that the otherworldly being who’s been raping her for most of her life is actually embodied in her father Leland (Ray Wise). The second half of this film is one long descent into the underworld, as Laura is increasingly drawn by the power of the Black Lodge and BOB.

In his infamous condemnation of Blue Velvet, Roger Ebert wrote: “If “Blue Velvet” had continued to develop its story in a straight line, if it had followed more deeply into the implications of the first shocking encounter between Rossellini and MacLachlan, it might have made some real emotional discoveries.” I would argue that Twin Peaks and Fire Walk with Me to an even greater extent, does just that. This film does not shy away from anything. Though obviously it’s a different story than Blue Velvet, I think it follows pretty accurately the “straight line” that Ebert describes. There are many horrific scenes in this film, and one of the most horrific is when Laura realizes that her father and BOB are one and the same. It only consists of Leland walking out of the house and Laura screaming, but you can feel her terror and disgust. It only becomes more distressing when the film continues and we realize that Laura is completely powerless; she knows she’s going to die but that’s actually the better option as opposed to becoming BOB.

BOB is still a supernatural power, as he is in Twin Peaks, and not an actual person. This may refute the claim I was making about the “straight line” earlier, but I don’t think so. BOB is clearly depicted as a very real presence, even if he has a supernatural origin. One of the biggest complaints against Fire Walk with Me is that it removes a lot of the mystery of the original series with regards to Laura’s character. While strictly that is true, I still think the film works and gives the audience a lot to think about in terms of the Black Lodge and the forces of evil lurking in Twin Peaks. And I still cannot help but marvel at Laura’s courage in accepting death rather than being possessed by BOB, something Leland Palmer clearly failed to do.

I’m done talking about story now so I think it’s safe to say that the spoilers are at an end.

I feel if you go into the movie with the right mindset, you won’t be disappointed. If you already know they recast Donna because Lara Flynn Boyle was working on something else at the time, you won’t object as much to Moira Kelly. Likewise, Agent Cooper is barely in it because Kyle MacLachlan didn’t want to do the movie either. Many of the series regulars are back, including the Log Lady and The Man from Another Place, but not all. None of the Hornes are in it, Shelly and Norma are in it for about two seconds, no one in the Twin Peaks sheriff department makes an appearance, and the same goes for Pete and Catherine Martel as well as Ed and Nadine. If you already know that the story is going to focus on Laura almost exclusively you’ll be prepared for the much darker tone, which I think is very appropriate to the story. It also explains why a lot of the characters don’t appear; really only the ones who came into contact with Laura are necessary. 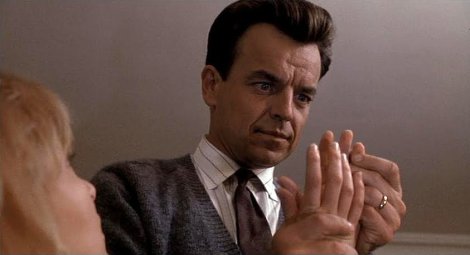 Lynch’s style here in on par with his other films. There are many visual callbacks to the original series, including the strobe lights and the design of the Red Room. There’s an almost obsessive concentration of the old woman and her grandson that Donna meets later in the show, the ones who disappear when she tries to go back and really like creamed corn. (There’s so much random creamed corn in this movie.) Lynch introduces some new and frightening images as well, with the symbolic angel and the extra-dimensional painting the old woman and her grandson give to Laura.

Twin Peaks: Fire Walk with Me is a good film, but it is dragged down considerably when compared to the original series and by its seemingly irrelevant opening. The film is very tragic, and is very distressing in its final moments. Sheryl Lee does a fantastic job playing a dead woman walking, as well as a remarkably courageous heroine. Her performance is definitely one of the highlights of the film. Though I agree in part with the criticism that the film wasn’t strictly necessary, I think it’s worth watching for Lynch’s further examination of the evil in Twin Peaks and Sheryl Lee’s performance as Laura.

“Faster and faster… until after a while you wouldn’t feel anything… and then your body would just burst into fire. And the angel’s wouldn’t help you, ’cause they’ve all gone away…”

5 responses to “Twin Peaks: Fire Walk with Me”