Ben and Jo McKenna (Jimmy Stewart and Doris Day) are an American couple travelling in Marrakesh with their son Hank (Christopher Olsen) where they meet a mysterious Frenchman, Louis Bernard (Daniel Gelin). After asking them numerous questions about themselves, he invites them to dinner and then blows them off. This strange behavior does not escape the McKenna’s notice, but nevertheless they strike up a friendship with another travelling couple from England, Lucy and Edward Dreyton (Brenda de Banzi and Bernard Miles). One day at the market, Bernard is murdered and imparts a sinister secret to Ben with his dying breath. In the chaos, Hank is kidnapped and it is up to his parents to unravel Bernard’s dying words and get Hank back. 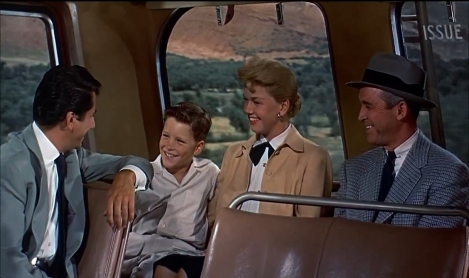 This leads the McKenna’s from Marrakesh to London. Avoiding the authorities for fear of Hank’s life, they struggle to solve two mysteries at once. They fear for their son’s safety and also the safety of whoever is at the center of the assassination plot that Bernard uncovered, but if only one is to survive it’s clear to them who it should be. For the authorities the opposite is true. The tension between the two makes for some great suspense. The McKenna’s often get close to their son before he is moved away again, and it’s very tragic to see them get so close but still fail. It’s plain to see they care about their son very much and it gives the film the emotional connection the audience needs.

However, there have been more intense kidnapping situations both in film and television, so what set this film apart for me was the humor. Hitchcock gives us just enough of both suspense and humor to balance the other out, so this is one of his lighter and more purely entertaining films. There is a scene where Stewart’s character is searching for a man in a taxidermy shop that foreshadows Psycho a bit, and when he gets into a fight the old man who owns it tries to save all of the taxidermic animals. At one point a swordfish is dragged directly into front of Stewart’s throat, giving the illusion that it is being cut. At another, he gets his hand stuck in a lion teeth. It’s a pretty great scene showcasing Hitchcock’s wonderfully dark sense of humor. There is another particularly humorous scene involving Doris Day’s inability to sing quietly, and not a few good one liners. The humor is really what had me enjoying the picture.

Speaking of Doris Day, it’s time for a personal anecdote. My sister got a DVD box set of a bunch of her musicals a few years back and watched them ad nauseum for a few months until I couldn’t stand the sight or sound of Doris Day. But I had a hunch she would be more tolerable in a less annoying setting and I was definitely right. I was very impressed with the work she does here. It’s not actually not that mind blowingly amazing, but considering the opinion I had of her before seeing this film, it kind of is. She does sing in the film, as her character is supposed to be a retired singer, but it fits well with the film as she mostly sings to her son. It’s like a signal to let him know that everything’s going to be okay. It’s pretty adorable. And in case you’ve ever wondered where the song “Que Sera Sera” comes from, this is it.

Music actually plays a pretty important role in this film, and it’s not just because Doris Day is in it. The climax of the film is set in the Royal Albert Hall during a concert, which is directed in the film by Hitchcock’s regular composer Bernard Herrmann. It’s great to see him in the film, as he’s contributed so much to cinema over the years, not just Hitchcock films. This scene is interesting as it is essentially silent film; the characters speak at some points but cannot be heard over the orchestra. Hitchcock tells the story visually as he is so great at doing.

I mentioned above about how the taxidermy shop in a way foreshadows Norman Bates’ room in Pyscho, but there are a few more connections to other Hitchcock films. During an escape from a church, Stewart climbs out through a bell tower, reminding me a lot of Vertigo. Another similarity to Vertigo is the suit Doris Day wears in the second half of the film. I remember reading about Vertigo that Kim Novak’s gray suit was a very big deal, as it was thought to be psychologically disturbing for a blond to wear gray. There’s not much psychologically disturbing about Day’s character here, so I wonder why costume designer Edith Head and Hitchcock thought to do this here. Either way, it’s very similar and got me thinking. Obviously the biggest connection is that it’s a remake of Hitchcock’s original 1934 film, and I promise that that will be the next Hitchcock film that I watch.

While I can’t comment on the effectiveness or necessity of remaking the original, I can say that this is a pretty good film. It’s not as deep thematically as some of Hitchcock’s other films, which is why it’s towards the bottom of his filmography for me. Regardless, I had a lot of fun watching it so it’s definitely not at the bottom. Doris Day’s performance was a highlight, as well as Herrmann’s cameo and the humor. Overall, it’s a lot of fun in the vein of North by Northwest that works very well. 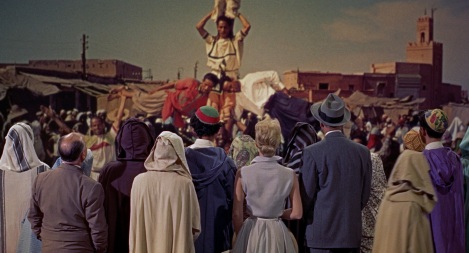 “You have muddled everything from the start, taking that child with you from Marrakesh. Don’t you realize that Americans dislike having their children stolen?”

10 responses to “The Man Who Knew Too Much”