AFI Top 100 Discussion is a series of posts dedicated to dialogues concerning the best of American Cinema as designated by the American Film Institute. Jon Harrison of A Cinematic Odyssey and I have been picking our way through the list since 2014, having covered nine films so far. Today we are discussing the 1925 silent comedy The Gold Rush. 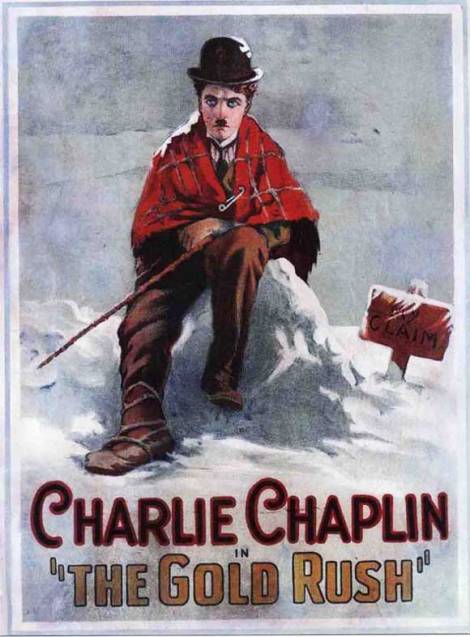 Today for our AFI Top 100 Discussion, Jon and I will be talking about Charlie Chaplin’s 1925 silent comedy, The Gold Rush. The film follows Chaplin’s iconic “Little Tramp” character as he travels to Alaska, looking for gold and the fame and fortune that comes with it. It made it onto the Top 100 at number 58, and as we discuss the film, and we’ll see if we agree with AFI’s conclusion. For those following along at home, the film is currently available to stream on Filmstruck.

Hunter: First things first. There are two versions of this film out there, one a reconstructed version of what the original 1925 version is thought to be like, and the other a re-edited 1945 version from Chaplin himself. It was hard for me to find out which version is more critically accepted… so we watched the 1925 one. It had sort of a disclaimer in text at the beginning that it might not play as complete and the picture quality might be uneven, but to me it looked really great. There were some frames missing and some shots looked better than others, but neither problem was glaring to me and I thought it all looked really amazing.

Jon: I agree with you Hunter, this film looked pretty spectacular for a film that had to be reconstructed along with being restored. I also read that in the 1945 version that Charlie Chaplin actually added in narration, and though I haven’t seen it, I’m glad we watched this version, because it’s a true silent film. This film had a lot of things that stood out to me, such as a couple cops being murdered in this film from the bad guy. That’s something I’ve never seen in a silent film, let alone any film prior to the end of Hays Code. I think we’ve both seen a few Chaplin films, is there anything here that stands out to you in relation to his other films, or films of this Silent Era?

Hunter: I did actually notice something about this film that I hadn’t previously noticed in other silent films, though I’m sure it happens. There’s a scene towards the end when they’re getting chased in the dancing hall, and the intertitles are used to speed up the pacing of the scene and give it more urgency. The words on the screen are not really the point, and you don’t need them to understand the story because they’re just repeating the same exclamation over and over again. The only reason to include the intertitles is to give Chaplin something to cut to and make the scene more frenetic. I’m sure it’s been done in other silent films, because it seems so obvious now, I just never really thought about using titles that way.

Jon: Wow, that’s really interesting. I had no idea that was even a thing you could do, after you explained it, I can imagine how that works. Haha it sounds like I will be rewatching The Gold Rush sooner than I thought!

Hunter: Well, I totally forgot about any cops dying so I guess we got different stuff out of the movie! What struck me most though, was simply the snow. Going into it, I didn’t really know that it was going to take place in Alaska, and having it be that barren snowy landscape was incredibly striking, visually. Whenever the film took place outside I couldn’t help but notice how different the film looked. 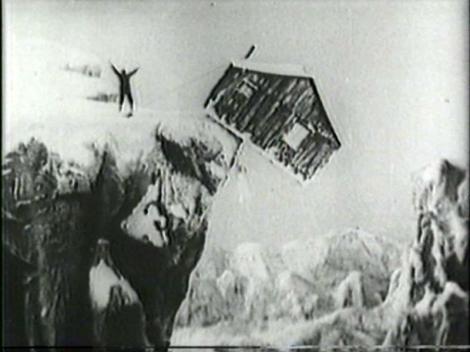 Jon: Glad you mentioned that, because the snow completely makes this film! The scene when the huge gust of wind blew through the door causing the people to fly out the door on the opposite side of the room was great, it made me think of the Loony Toons. Charlie Chaplin did a lot to make the environment play a part in the film from the simplest details, to directly influencing the narrative. The funny thing is I felt the same, but when the film takes place indoors. It stands out to the point where it kind of takes me out of film for a brief moment. It’s not that those moments are bad or anything but I’d prefer to watch the Little Tramp continue to have deal with the snowy environment.

Hunter: Speaking of the contrast between the indoors and the outdoors, I was really unsure about this film for most of the time I was watching it. It starts out with him looking for gold and then being sort of stuck in a cabin starving, and then transitions into the stuff with Georgia. I was worried for a really long time that these were just gonna be two halves of a story that would never really match up. They do in the end of course, but I think Chaplin just barely pulled that off. Though of course, that type of thing is something I’ll probably only experience the first time around, and when I go back to it the whole film might seem much more unified in the two plotlines. Did you have that experience at all either time you watched it?

Jon: Well I’m not sure if I’ve told you before but this actually my second time watching this film and both of those times I definitely had that experience. Haha I don’t think it’s any surprise that when that whole transition to situation with Georgia happens, we start to see more of those indoor scenes in that town. I think pretty much everything in that town holds the film back from being a “masterpiece,” but thankfully it all comes to fold in the end. I’ve only seen Modern Times in its entirety once, and the two other times I stopped soon after Little Tramp finds the woman love interest. I suppose that’s a part of a lot of his stories, but they disrupt the tone of these two films in particular. 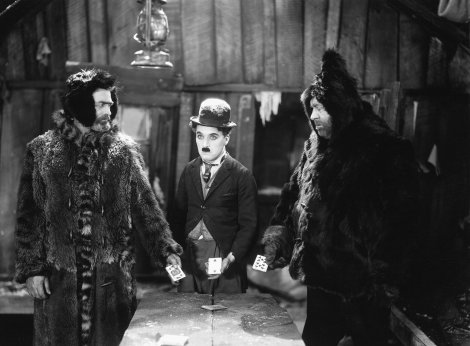 Hunter: As you know, I’m not a huge fan of Modern Times, even though I know it’s a beloved classic. I did end up liking this film a little more though. Both of them have a lot of iconic images that are cool to see when they show up in the complete film. I had definitely seen the part where he imagines Georgia and the other girls spending New Years with him, and he makes the potatoes into shoes and does a dance with them. It’s cool to see it appear in the film when I had only seen it in isolation previously. And it’s a funny inversion of him eating his shoes in the beginning when they are starving. Prosperity is clearly playing with your food, not eating your clothing ha ha!

Jon: Ahhhhhh the potato shoes part is one of my favorites, the expression he has on his face while doing that ridiculous dance is the perfect combination. I’ve actually never seen any of his films in isolation like that, so that’s interesting to hear considering it’s a silent film. Yeah this movie in generally really funny. There’s a lot of his usual laughs through the very nature of his character, but that scene in the town when he’s trying to acquire some cash by shoveling snow, to afford that dinner on New Years is hilarious. The visual cues there are set up so perfectly and then how mad the guy next door was when the Little Tramp piled up snow in front of his door but still ended paying him to shovel it away towards the Jail houses door, so so good. That was so random for them to eat their clothing, but I guess we should have seen it coming after we witnessed him straight up eat a candle with table salt haha!

Hunter: Yeah there are just so many great comedic scenes in the movie. If I had any complaints, it would be that I liked a lot of those individual scenes more than the film as a whole. Even though visually the film was great, and a lot of the comedy was there, I wouldn’t necessarily think The Gold Rush is one of the greatest of all time. AFI had it at 58, between Rocky and Nashville. Those are two of my favorite films, but still. I think I could be justified in saying that I’d personally take The Gold Rush off the list.

Jon: Well said, and I agree with you, although it’s nice to that it’s ranked above Modern Times which is at number 78. I wouldn’t have any problem if this film was ranked in the 80s or even 90s. Despite us not really vibing with the film as a whole, i’ll probably revisit this film a couple more times in my lifetime, mainly for the interactions in the snow.

There goes another AFI Top 100 Discussion. Jon liked the film a little bit more than I did, but at least I was able to appreciate another Chaplin film a little bit more. We agreed that there were several great comedic moments, but the film could have flowed a bit better as a whole. Maybe the 1945 version might come together a bit more? Maybe we’ll go back and watch that version someday. Even so, The Gold Rush was a pretty entertaining silent comedy, regardless of its spot on the list. Feel free to leave some comments below, especially if you have any insights about the different cuts, and look out for another AFI Top 100 Discussion coming soon!