I feel as if In the Mood for Love is just about impossible to write about. A lot of films benefit from a lot of analysis, making what you see on screen that much more clear and powerful, or perhaps even that much more expansive and mysterious in its ideas. I watched In the Mood for Love yesterday afternoon, and am trying to read some about it this morning, but have had a hard time connecting the words on my laptop screen with the scenes that played out on my television screen. While insightful and seemingly correct in their representations on what is going on in this movie, I just feel like maybe words are futile in this case. But let’s give it a go anyway, shall we?

Mrs. Chan (Maggie Cheung) and Mr. Chow (Tony Leung) are next door neighbors in 1962 Hong Kong who discover that their spouses are cheating on them with each other. While Mr. Chan and Mrs. Chow are absent for most of the film and when they are present, they are either shot from behind or totally off camera with only their voices heard, their mutual betrayal of our main characters is felt by the loneliness and isolation they find themselves in. Mrs. Chan and Mr. Chow grow closer puzzling over their spouses’ affair, even acting out hypothetical confrontations with them or scenes between the two adulterers. It appears that even after their spouses’ affair has ended, Mrs. Chan and Mr. Chow are forever destined to remain apart, as they don’t seen to be quite able to give in to the adulterous impulses that their spouses apparently did. 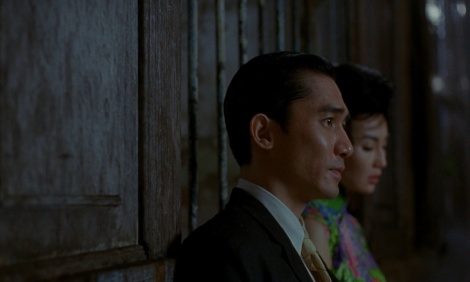 One could say this movie is about unrequited love, or sexual repression in the face of societal pressures, or the style that Wong Kar-wai films it in and the aesthetic he surrounds his two main characters with. I feel you’d be right on all counts, but as with some other films about illicit affairs, or lack thereof, to me it’s more about the terrifying amount of control the characters have on themselves, and how this control or extreme reservation prevents them from doing the very thing they want to do. All of these topics are entwined very closely in the film I feel, as it’s clear that the film’s devotion to a languishing tone and the characters’ feeling that they must remain in strict moral control of themselves all conspire to create the narrative of unrequited love that audiences latch on to.

When speaking about this film you can’t overlook the style. This is in the camera work, production design, and framing, just as well as it is in the acting style and costume design. The substance of this movie is in the style, not so much in the exact events that play out onscreen, which are not even easily discernible sometimes. The meaning is in the upright way Mrs. Chan holds herself, and the tight and constricting dresses she wears. These might at first appear, especially to modern audiences, as Mrs. Chan living up to the expectations of her time and place. Then another character directly contradicts this through dialogue; no one really expects her to be that dressed up, at least not all of the time. She holds herself to that high standard, but is it through some sort of extreme internalization of society’s teachings or merely her own personal choice? The film doesn’t make it very clear, but it is clear that this character couldn’t do anything different. Doing what one wants becomes such an elusive concept.

We see this towards the end of the film when Mrs. Chan follows Mr. Chow, who’s left Hong Kong because he knows he has no future with her. She can’t bring herself to face him for whatever reason, and she simply sneaks into his room and drinks in his presence. It fits right in with the mournful presence she’s been throughout the film, always alone, always aloof, always tentatively about to join in but reaching back at the last moment, returning to comforting sadness once more.

The film’s aesthetic is just as rigorous as its characters’ behavior (though I’ve mostly spoken about Mrs. Chan, it’s also clear that Mr. Chow regulates his behavior in respect to her as to not really do anything she doesn’t want to do). Though Wong is known for shooting in a highly improvisatory way, you can’t really know that from the film that ends up on screen. Everything feels exactly calibrated in the pacing and editing. This goes for individual scenes as well as the whole film, in which characters are often scrunched into one side of the frame or excluded from the frame altogether. When both Mr. Chow and Mrs. Chan are in the frame together, there’s often some graphic element separating them. This is the directorial and cinematographic equivalent of the character’s furtive hand gestures, reaching out and pulling away, being together then separated.

As with the other Wong Kar-wai film I’ve seen, Chungking Express, I feel there’s some of cultural context I’m missing, especially in regards to the ending. I’m not sure why world affairs suddenly intrude into a story which up until the end has been fairly insular and specific to its time and place. That doesn’t mean the final shot has any less power though, maybe it was mostly done for the emotional effect of the location Mr. Chow is in.

Who’s knows if I’ve summed up this movie adequately, probably I haven’t. I did profoundly appreciate it when I was watching it and I hope others will seeks it out if they haven’t seen it already. It’s the more stylistic type of cinema that feels more like music, with repetition and variations on events, but I still had a strong connection to the characters anyway. Sometimes style can be a distancing effect, but I think it brings you more into the story here.

One response to “In the Mood for Love”