A very small part of me might be persuaded to brush off Jackie as a melodramatic women’s picture, which I hope says more about internalized sexism in our society than the film itself. A woman’s despair is so unashamedly the main focus of a film behind which unfolds a major event in America’s history, and therefore could seem to exploitatively depict self-indulgent sadness. However, even if at times I was worried this was the case the film does such a good job at digging into this grief, while adding some more dimensions, that I ultimately feel I can get on board with Jackie.

Describing the plot of the film is pretty difficult, seeing as it is more of a mood piece than a presentation of a linear plot. It follows Jackie Kennedy (Natalie Portman) after the assassination of her husband. It uses many different tools to do this, including a frame narrative in which a Life magazine reporter (Billy Crudup) interviews her. If the film has to be said to have a story, I suppose this one is the easiest to make sense of. The conflict between the two of them shows that Jackie wants the public to see her and her husband a certain way, which may or may not be the strict truth. This part of the film also might be the most tedious, as instead of seeing what actually went on we are treated to the reporter’s easy summations of it. However, there are positive aspects of this too, as we do see part of the fabrication of the story and also some stunningly confessional scenes.

The meat of the story, what the flashback show, is far more compelling than anything the reporter has to say about them. We see restaged excerpts of Jackie’s famous tour of the White House which replaces the real life Jackie Kennedy with Portman but in other respects seems to be the same (can’t say I’m an expert on the broadcast, but for all intents and purposes it seems to be legit). Again, we continue to see Jackie’s project of creating and maintaining a certain image of the Kennedys in the White House. We are told that she pays far more attention to the history of the building than previous inhabitants, concerned with drawing a direct line between the greatest American presidents and JFK.

The other segments occur during the assassination and the funeral. We see Jackie’s grand vision for her husband’s funeral, horrified at the plans to bury him with his family (“Brookline is no place to bury a president”) and demanding a processional with his body, at least in part copied off of Lincoln’s funeral, even though there are security issues. This is where we see her in more of an antagonistic mode, though still deliberately wearing her sorrow as a badge of pride. The most compelling part of the film for me, and also the one that had me the most worried about the film, is the sections of Jackie drinking and wandering the White House, seemingly glorying in the tragic loss of an exalted past. The camera for the most part stays very tight on her, giving off a suffocating feelings that’s at odds with the sweeping movement of her walk through the house. It’s both confining at freeing at the same time. 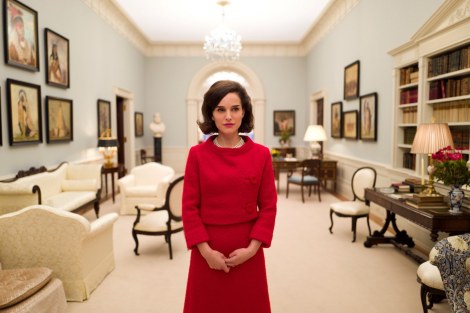 At this point it occurred to me that it seemed as if both the film and Portman’s performance was showing a morbid sort of joy at all this grief and despair, that it was sort of wallowing in this one woman’s pain at a time of great instability and fear for the entire country. I don’t know if that is pro-feminist or the opposite, but something about watching Jackie wander through the house felt both heartbreaking and listless to me. For me, it seems like both the biggest pro and con of the film.

Though I guess I kind of lied about that, because there are some bigger cons. Mainly is the journalist summing things up for us, I’d count that as chief among the cons. The other is related to that listless feeling. For the most part the film seems to use this scattered quality to its advantage, portraying Jackie’s grief as leaving her confused and constantly jumping from one mode to the other. On the other hand, even though this is a relatively short feature (100 mins) some of this jumping and repetition feels like padding, as if there wasn’t actually enough to stretch the film to even the 100 mins it does give us.

I really loved the experience of watching Jackie. I’ll be the first to admit that it has some flaws, but I think it displays both a personal and a national grief pretty powerfully. We see in Jackie that the First Lady has many different identities, and that maybe what might in some ways be a self-centered and insincere way to expresses grief, might also in other ways be stately and appropriate. I can’t help but see this mourning for the presidency as incredibly resonant, the wish that our country could be as dignified as other countries’ royalty. 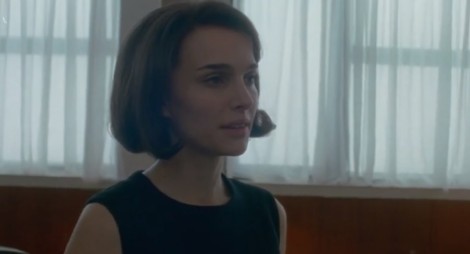