The Blindspot Series is a series of twelve posts spread throughout the year designed to offer bloggers a chance to catch up classic films we somehow may have missed. Started by The Matinee, here is my list of Blindspot films for 2016. October’s selection is Peter Weir’s Picnic at Hanging Rock. 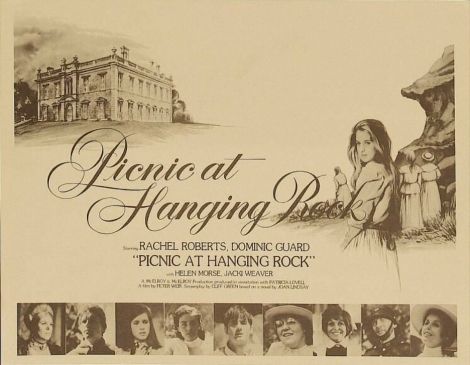 God knows, I haven’t been as good about the blindspots as I should be. Part of that is because for some reason, I tend to pick films that are a bit too challenging for me. Like my last one, L’Avventura, Picnic at Hanging Rock features missing girls, a threatening landscape, a weird atmosphere, and an unsolvable mystery. There are many similarities, but the main one is that I just left the movie really confused about how I felt about it.

I actually had to watch Picnic at Hanging Rock twice. I’m not sure if that somehow violates this post being a blindspot, but I’m going to keep going anyway. The first time I was so sleepy that I definitely missed some parts, though on a second viewing a week later, staying awake the whole time, I didn’t notice anything I had missed. I’m not sure if the film had hypnotized me in some way, but that’s kind of what it felt like. 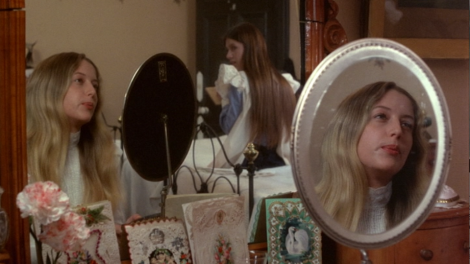 A group of schoolgirls head out for a special picnic on Valentine’s Day in 1900. They all go, minus the headmistress (Rachel Roberts), one of the teachers, and one girl who has not learnt her lesson, Sara (Margaret Nelson). Four girls, Miranda (Anne Lambert), Irma (Karen Robson), Marion (Jane Vallis), and Edith (Christine Schuler), break off exploring around the rock, but only Edith returns. The geometry teacher goes to look for them and never returns either. The remnants of the party are forced to return to the school while the police investigate, though they don’t turn up anything either. Two men from another party on the rock that day eventually find Irma, but she has no memory of what happened or where the others are. The school falls into increasing states of shock and despair as the girls whereabouts continue to be unknown.

Various reviews have described the film as a mystery without a solution, only clues. But there really aren’t many clues, either, which makes it a very confounding film to watch. When I think of a film of that description I think of something more concrete and rooted in fact, where every stone has been unturned and somehow the answer still eludes us (Zodiac seems like an example of this to me). A mystery with no solution and only clues seems to suggest an active search, that while thorough, yields no results. While part of this movie has active searches, it mostly has people stumbling around, afraid and mystified, and they only sometimes come back. Usually they don’t learn anything new. This whole film, like L’Avventura, seems less like what we would think of as a mystery film and more like the depiction of a weird state of mind.

The weird state of mind I refer to has to be some strange combination of awe in the face of nature and repressed sexuality. In the school, we see a lot of how the girls are brought up in Victorian society; corsets are laced, gloves and hats must be worn in company. Sara in particular is tied against the wall to correct her posture later in the movie, she also protests at having to memorize poetry of the establishment that makes little sense to her. On the rock, things are slightly different. The headmistress allows the girls to remove their gloves once the pass through town, which they gleefully do. As the four girls break off and ascend the rock, they take off their shoes and stockings, much to Edith’s mortification. So much so, that that seems to be what alarms her and makes her turn back. That, along with ponderous shots of the rock itself, usually at low angles to emphasize their power, connects nature and sexuality in a powerful way in the film.

The film also has a bit of an unsettling male gazey aspect to it. Not so much as to stop me from watching it, but in the absence of conclusions to draw from the film it really stood out to me, especially on the first viewing. The whole film is sort of peering into the inner world of the schoolgirls, while not really allowing them to develop as individuals (which is more of an observation rather than a criticism; no one in the film is really a fully fleshed out individual). Whether the camera is looking through a window or a mirror or blades of grass, you get the voyeuristic feeling of intrusion. The character of Miranda in particular exemplifies this tendency of the film to the greatest degree. The way she is shot, a lot of times as another character’s imagination in a super-imposition over the rock or birds flying through the air or another shot of natural elements, suggests that she is sort of the ideal virginal girl super connected to nature about to have a sexual/pagan experience. Though I sort of get that it’s part of what the film is going for, it’s still a bit uncomfortable. 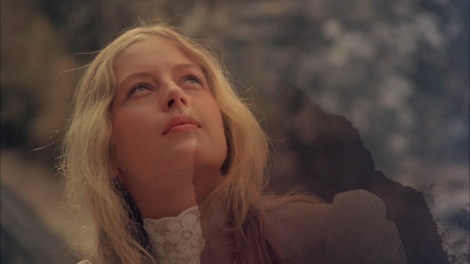 That’s no to say the film isn’t breathtakingly beautiful, at least on a surface level. The cinematography by Russel Boyd never ceases to be aesthetically pleasing, capturing the natural landscape and characters alike in a gorgeous sunny light. One reason I think the film is still a bit off-putting is that the rock never really visually registers as horrific or mysterious to me, just beautiful. I really wish I could see the film in theaters at some point, as I really think it would have a better effect.

I can’t honestly say whether I like Picnic at Hanging Rock or not, though at least writing this and reading about it has made me appreciate it more and have at least some idea of what it is doing. Having watched it twice already, I guess I can say I’d be open to seeing it again, especially if I ever came across it in a theater at some point. It ends up being a pretty unusual film, but not an unrewarding one. 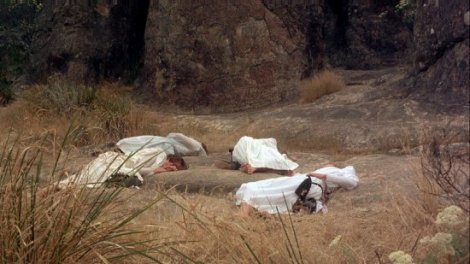 “Everything begins and ends at the exactly right time and place.”

Criterion essay
Roger Ebert “Great Movie” review
The New York Times review
Hanging Rock, like Fargo, only wishes it was based on a true story

One response to “October 2016 Blindspot: Picnic at Hanging Rock”