So here we are, at the end of season two. That doesn’t super matter, in terms of the continuity of the show (since there basically isn’t any) but it feels like a milestone. This is a decent group of episodes, even though the previous couple have maybe been a bit better. 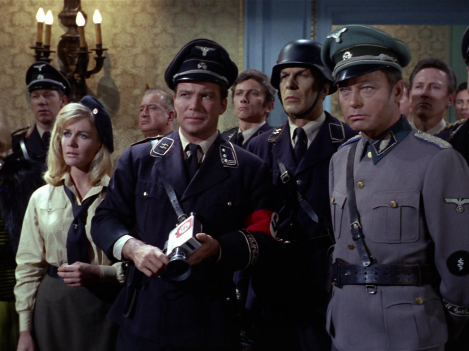 Original Airdate: 16 February 1968
Directed by: Vincent McEveety
Written by: John Meredyth Lucas
Wikipedia synopsis: “The crew of the Enterprise visits a planet dominated by a Nazi culture and at war with its planetary neighbor.”
Favorite quote: “Quite correct. You should make a very convincing Nazi.”
(sorry, the Tumblr commentary for this episode was inadvertently deleted)

This is an episode where TOS gets real. Kirk, Spock, and the crew beam down to find out what happened to one of Kirk’s old professors, a noted historian on Earth, John Gill, and disturbingly find that he has set up a system based on Nazism there. The episode tries for a sort of swashbuckling Indiana Jones feel (heroes going undercover as Nazis will never not remind me of Indiana Jones, and given that Kirk has to become a documentary filmmaker, the episode is reminiscent of Inglorious Basterds as well) but it doesn’t balance the humor and the terror quite as well as that adventure film (though who can blame them, really?). In then end, it deals with the cult of power inspired by Hitler-like dictators and the dangers of ignoring history, but sort of glosses over any inherent racism between the two planets that must have existed in order for Gill’s plan to work in the first place. Though, overall, it is one of the more thought-provoking episodes of TOS, so I have to give it points for that.

I liked this episode. It mainly dealt with aliens eventually becoming more human-like because of their interactions with the Enterprise crew. This happened in a lot of different ways, Scotty getting one of them drunk, Spock playing mind games with their leader (and three level chess!), and as always, Kirk seducing the female one. It’s pretty engaging, and this is all done over the backdrop of intergalactic travel, something that the federation is not capable of yet. It’s pretty cool to think about, even though it’s not necessarily the point of the episode. 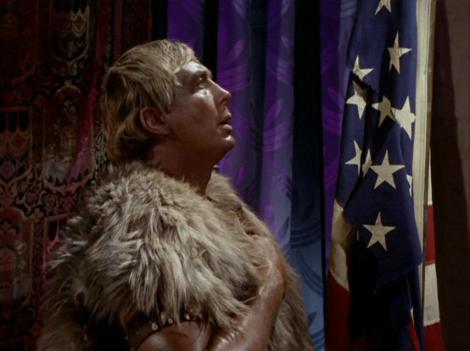 Original Airdate: 1 March 1968
Directed by: Vincent McEveety
Written by: Gene Roddenberry
Wikipedia synopsis: “Captain Kirk must battle a deadly virus and a treacherous fellow starship captain to stop a meaningless intertribal war.”
Favorite quote: “A star captain’s most solemn oath is that he will give his life, even his entire crew, rather than violate the Prime Directive. ”
Tumblr commentary

I’ve said it before and I’ll say it again, anybody who thinks TOS never gave up interesting themes in favor of a lot of fight scenes is just plain wrong. Maybe they do it less than JJ does, but they still do it. This episode wasn’t bad, it was just frustrating for me because it threw in about a million ideas but really only seemed interested in fight scenes. At the beginning we have a ghost ship with a bunch of crew members reduced to dust. Then they beam down to the planet and find the federation captain, and work through a bunch of prime directive stuff (and Kirk is a huge hypocrite). Then we get into some weird stuff with the planet paralleling an alternate history of Earth in which America looses the Cold War (which became hot somehow) and reverted back to their “savage” Native American ways (which is so problematic I don’t even want to think about it). Lots of ideas, all of which are dealt with perfunctorily, and even more fighting. I kind of wished they had just stayed on the ghost ship and had to battle the water-sucking contagion against a ticking clock…. (but I think that’s basically the rapid aging episode of The X-Files. Awk.) 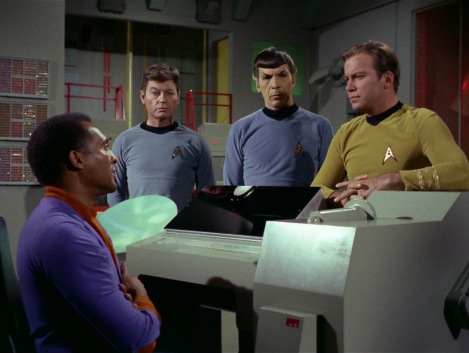 Original Airdate: 8 March 1968
Directed by: John Meredyth Lucas
Written by: DC Fontana and Laurence N Wolfe
Wikipedia synopsis: “A new computer system causes havoc while being tested aboard the Enterprise.”
Favorite quote: “Computers make excellent and efficient servants, but I have no wish to serve under it.”
Tumblr commentary

This episode aired about a month before 2001: A Space Odyssey showed up in theaters, but nevertheless it manages to feel derivative. That probably says more about the concept than either of these works, but still, it bugged me throughout the episode. Everyone knows that once they install a supercomputer on the Enterprise, called M-5, someone’s going to end up dead. Nevertheless, this was a much more tightly constructed episode of TOS than most, sticking to one pretty good idea instead of throwing like a million around and abandoning them one after the other. I really liked the guest star for this episode, Dr. Daystrom (William Marshall) the inventor of the M-5. But best of all, the dynamic between the crew members is really well done here. Bones is outraged about the replacement of humans by supercomputer, Spock is delighted to see something as logical as himself on board, and Kirk is caught somewhere in the middle, worrying about his irrelevance and the safety of the crew but at the same time not wanting to stand in the way of scientific progress. Their character moments are really great in this episode, and it’s much more concise than most episodes, if only the main plot could have been a little more unusual. 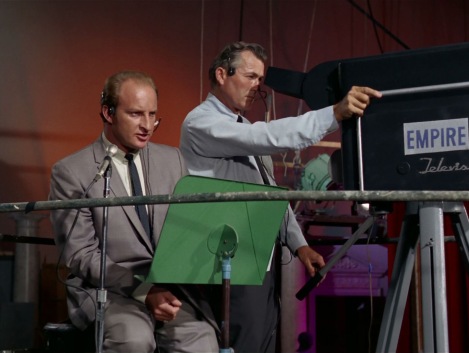 Original Airdate: 15 March 1968
Directed by: Ralph Senensky
Written by: Gene Roddenberry and Gene L Coon
Wikipedia synopsis: “Captain Kirk and his companions are forced to fight in gladiatorial games on a planet modeled after the Roman Empire.”
Favorite quote: “You bring this network’s ratings down Flavius, and we’ll do a special on you!!!!”
Tumblr commentary

I was not excited for this episode, considering it combines two really old TOS set ups: gladiator fighting and a planet that is just like Earth. At least they did some stuff to distinguish this episode, like added in a bunch of digs at television and made Spock and McCoy fight instead of Kirk. Also notable, Uhura got to say something semi-useful at the end, so that’s nice. 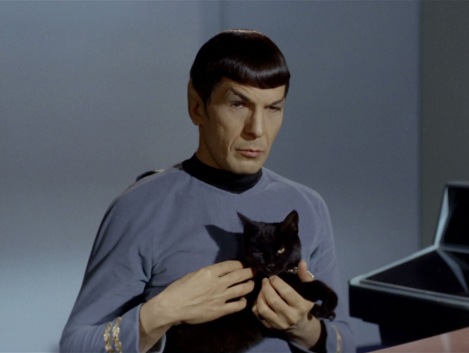 Original Airdate: 29 March 1968
Directed by: Marc Daniels
Written by: Gene Roddenberry and Art Wallace
Wikipedia synopsis: “During a historical research mission in 1968, the Enterprise encounters Gary Seven, a human from the future who appears to be attempting to alter history.”
Favorite quote: “Captain, we could say that Mister Seven and Miss Lincoln have some… interesting experiences in store for them.”
Tumblr commentary

So I’m of two minds about this episode. On one hand, it’s pretty hilarious and I had a good time watching it. On the other hand, it’s pretty ridiculous. I think it was a backdoor pilot for another show that never got off the ground, and you can see why, because Seven and Miss Lincoln feel like a bunch of sci-fi tropes rolled into one without a real focus. I guess you could say it’s the oposite of Star Trek, in that Seven’s whole mission is to disobey the prime directive (which on 20th century Earth, he obviously doesn’t have to obey anyway). Of course, Kirk usually ends up diobeying it anyway. I liked the bits with the cat though, just because they were so dumb and hilarious. It could be because I missed some stuff, but I was very confused about people’s goals throughout this episode, it’s just not super to have Kirk and Spock follow around Seven just to try and figure out what he’s doing (because they act like they already know and want to stop him). I’m not sure if the adventures of Seven and Miss Lincoln would have made a good show, but this episode definitely doesn’t make it seem like it. (A show about that cat though, that might have been great.)

We finish out season two on a strange note, as Kirk and Spock basically become side characters on their own show in “Assignment: Earth.” “Patterns of Force,” “The Omega Glory” and “Bread and Circuses” put in a good effort at mixing up the formula, but ultimately feel like “same old, same old.” “The Ultimate Computer” is definitely one of the best constructed episodes of TOS out there, even if thematically it’s not that fresh. “By Any Other Name” is the opposite of that in a way, slightly more interesting, a lot looser, and a lot sillier, but probably my favorite out of this group (even if it’s not the best). Hopefully season three isn’t as bad as I’ve heard!

Click here to read reviews of the next group of episodes! (S3, E1-5)