Get ready, you guys. This might very well be the best group of TOS episodes ever reviewed on this blog. It does include the most famous episode (which is also the first episode of TOS I watched, before I started reviewing them). I remember this happening in another group of episodes too, but there’s a weird sort of thematic repeat in two of the episodes, but other than that these were all pretty good.

Original Airdate: 1 December 1967
Directed by: Joseph Pevney
Written by: DC Fontana
Wikipedia synopsis: “The crew of the Enterprise become entangled in a planet’s tribal power struggle.”
Favorite quote: “I’m a doctor, not an escalator! Give me a hand!”
Tumblr commentary

Okay, this episode was amazing. This is one of those classic episodes that has the best of everything TOS has to offer. It has the social commentary, it has the humor, it has the dumb costumes, it has the low budget 60s feel…. basically it’s perfect. I wouldn’t say top tier, but very close to it, like right below. Basically the crew comes upon a Spartan-like culture and McCoy helps deliver the dead tribal leader’s baby, which investigates some (sort of interesting, probably semi-unintentional) issues about the role of women in this alien society, and of course, by extension, the humans assumptions of such…. Also the humor is so goofy I love it. 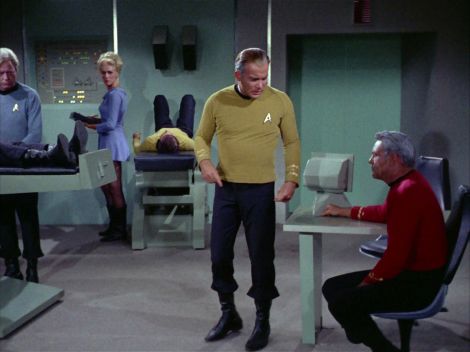 I also quite liked this episode, where many members of the crew experience rapid aging and Kirk looses his command because of it. It has some good humor, bad old age makeup, and a scene where they have a hearing to determine whether or not Kirk is fit to command in his old age that just felt like a waste of time. Besides that part of the show, I thought this episode was another really good one.

Original Airdate: 15 December 1967
Directed by: Ralph Senensky
Written by: Art Wallace
Wikipedia synopsis: “Captain Kirk becomes obsessed with destroying a murderous entity that killed many of the crew of his old ship.”
Favorite quote: “You can add that little price tag to your monster hunt.”
Tumblr commentary

I watched “The Deadly Years” and “Obsession” back to back, and “The Deadly Years” definitely came out looking better. I don’t know why they aired these next to each other, because they both feature Kirk getting needlessly paranoid about the crew following his orders. In both cases, the crew is right, so it’s kind of annoying to see two similar situations where Kirk is at fault play out back to back. This one doesn’t have as many high points, because they are just hunting down a bloodsucking cloud. It does, however, have some sass from Nurse Chapel, which you don’t always get but we always should. It also features some more expressionistic direction than you usually see on Star Trek, but ultimately, coming so soon after “The Deadly Years,” I wasn’t into paranoid Kirk and that held it back for me.

I was especially curious about this episode, given that it was written by the guy who wrote the book that Alfred Hitchcock’s Psycho was based on. Interesting person to write a TOS episode, and it was a pretty crazy episode. It does have a fair amount of violence against women, perpetrated by an evil alien force that inhabits different characters (like BOB from Twin Peaks). I really liked this premise, and they took it to some really crazy places by the time the episode was over. This is one of those episodes of Trek when it feels like they’re just throwing everything they can think of at the premise and seeing what sticks, and honestly, it all sticks.

Season 2, Episode 15: “The Trouble with Tribbles”

Original Airdate: 29 December 1967
Directed by: Joseph Pevney
Written by: David Gerrold
Wikipedia synopsis: “Tribbles – purring, limbless, and fertile – disrupt the exploitation of a disputed planet between the Klingons and Federation.”
Favorite quote: “Will somebody get these tribbles off the bridge?”
Tumblr commentary

“The Trouble with Tribbles” is the most recognized episode of TOS, hands down. It’s example of a TV show excelling at self-referential humor, and it’s one of the only TOS episodes to do this (pretty sure this is one of the only intentionally comedic episodes in the show’s run). It’s pretty great. In addition to being completely hilarious, it also is a lot more casual than your average episode. We get to see more of the Enterprise crew, just hanging out, which is cool.

I didn’t like “Obsession” as much and “The Deadly Years” had that court scene that stopped it dead in its tracks, but the other three episodes were really top notch. “Friday’s Child” had McCoy and gender politics in the spotlight. “Wolf in the Fold” had some detective work and explored the nature of evil. Last but not least, “The Trouble with Tribbles” was still as hilarious as ever. Great group of episodes and let’s hope the next group is just as good.