For the month of Noirvember, I’ve decided to catch up with some classic pieces of film noir, the American 1940s-50s movement devoted to cynical fast talking anti-heroes, predatory femme fatales, smoky back rooms, “one last scores,” and dark shadowy pasts. From The Maltese Falcon to Touch of Evil, film noir has been an essential part of film history. Next up this month is a textbook example of the movement, Joseph Lewis’ The Big Combo. 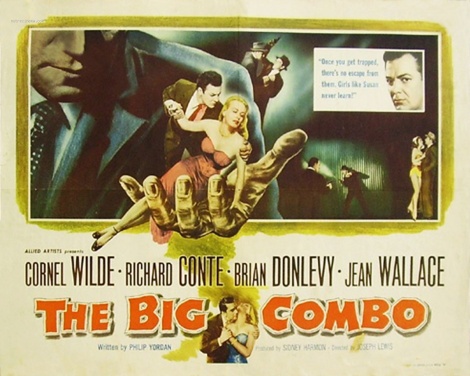 When I term The Big Combo “textbook film noir,” I mean it. I first became aware of it from the famous final shot, of two figures silhouetted against a backdrop of fog. I was enthralled by that shot before I even knew the title of the film, and now that I’ve seen it, I can definitively say that it builds up to that final shot perfectly. The Big Combo is very nearly a perfect film, and even though I use the term “textbook film noir,” I’m not using it disparagingly in the least.

The Big Combo refers to a crime syndicate headed up by Mr. Brown (Richard Conte) that Lt. Leonard Diamond (Cornel Wilde) has been trying to take down for at least six months, draining his departments resources in the process. Of particular interest to him is Mr. Brown’s girl, Susan (Jean Wallace), a nice girl who seems to be in a bit over her head. Mr. Brown, along with his associates McClure (Brian Donlevy), Fante (Lee Van Cleef), and Mingo (Earl Holliman), has committed so many crimes it should be easy to catch him at one, but apparently not. Mr. Brown and Lt. Diamond get locked in battle over Susan, morality, and the law until one of them finally looses.

This is a fairly typical noir picture in terms of plot, though it does in some ways represent a more straightforward police procedural. I usually think of noir detectives being PIs as opposed to police lieutenants, and that change comes a more moral (professionally anyway) hero than you see in most noirs. Lt. Diamond is obviously trying to stay within the law here, rather than already working outside of it. Also, besides the fact that this investigation has been going on for six months (I think?) you don’t get that noir sense of the past catching up to the hero in this movie. He just sort of goes on about his business trying to catch Mr. Brown, and the way that all wraps up isn’t typical noir either.

However, what does make this picture stand out, other than the film noir high contrast smoky style that this film has in spades, is the depravity essential to a lot of noir pictures. There are multiple torture scenes that don’t get that explicitly violent, but are still pretty horrific in their implications. I sort of see where David Lynch could have gotten some of his Blue Velvet ideas from Mr. Brown and Susan’s relationship (obviously not as extreme here, but for 1955 it’s pretty extreme). It’s clear, especially in one very envelope-pushing scene, that Susan stays with Mr. Brown even though she’s miserable all the time because despite his awfulness, she’s very attracted to him. Though I think he’s being painted as more morally upstanding by the film than he really is, Lt. Diamond isn’t that great to women either. He’s been creepily stalking Susan for months before the film starts all in the name of the law, but that does that make it any better? And his treatment of his on again off again girlfriend, Rita (Helene Stanton), could have been a lot nicer that’s for sure.

Further challenging censorship and sexual politics of the day, you have the two hitmen of Mr. Brown, Fante and Mingo, clearly in a homosexual relationship. It’s quite touching really, as you can clearly see that Fante takes care of Mingo and they are very attached to each other. It’s never directly addressed or shown, but at the same time it’s pretty obvious to any modern viewer. It’s just nice to see all of this forbidden stuff by 1950s standards making its way into this movie when a lot of it isn’t even shown all that much today.

The film also tangles with the American Dream with the character of Mr. Brown in a way I really appreciated. In a way, the haunted past that usually follows the noir hero is following him, but of course being the villain he doesn’t care in the slightest about what he’s done. We don’t get the full story, and the part that we get I’m not sure is true, but nevertheless Mr. Brown has definitely reinvented himself in the name of underworld social climbing. Perhaps motivated by his first wife (who plays a prominent role by the end of the film) in a Great Gatsby sort of fashion. He used to work under a guy named Grazzi, seemingly connected to an Italian mob, whereas Brown is a decidedly plain English name. (I tried to avoid it but I can’t- the same actor play Barzini in The Godfather!) He never goes by anything else, and is so concentrated on maintaining his superiority over everyone at all times. He has to constantly declare it too, in great speeches and fantastic one liners, but you can’t help get the feeling that his reinvention and pursuit of power is masking something, even if it just is resentment over having to remind everyone so often. 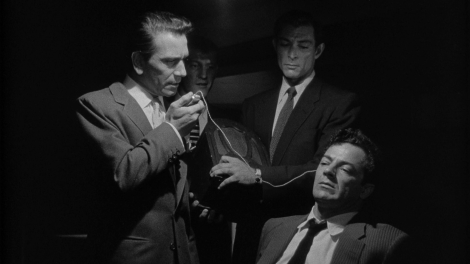 As you can probably tell, watching this film I wasn’t actually paying too much attention to the cinematography by John Alton for which it is so justly known. I was involved enough with the plot and characters, which is arguably how it should be. Nevertheless the dark and shadowy atmosphere was very effective. Hardly anything takes place in day, and the actors are usually lit by one single light from above. There are many shots showing this setup, which has the double effect of being high contrast and very harsh (noir must-haves) and sticking this giant lamp at the top of the frame, weighing all the characters down. There’s also some straightforward but effective symbolism at the end with a spotlight trained on Mr. Brown that I really appreciated, piercing through that fog and uncovering his depravity once and for all.

If I have any complaints about this film its how it ends. Just the tone of it, kind of like my previous Noirvember film The Lady from Shanghai, doesn’t quite match everything that came before. The scenes themselves are great, but the new status quo inhabitated by the characters after the film ends is just not satisfying. Kiss Me Deadly definitely one-ups these two on that front. Also I think Cornel Wilde is just not conflicted enough throughout this movie, though I liked a lot of his stuff I think the movie would have been a bit more interesting had he realized sooner that maybe he isn’t as great of a guy as he thinks he is. Those are really minor quibbles with a film that does so many things right. The Big Combo is a textbook example of a film noir for a reason, and I’m looking forward to revisiting many more times in the future. 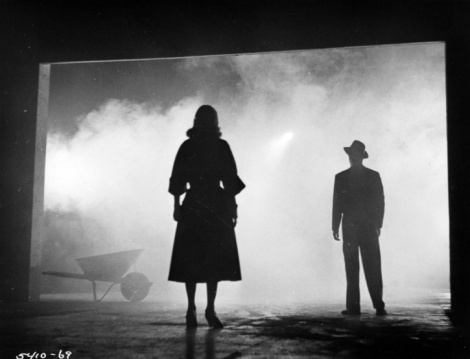 “First is first and second is nobody.”