I was very excited to watch A Fish Called Wanda, thinking it would be funny. Unfortunately, for some reason, I didn’t find it that funny, which sort of kills the movie. I laughed occasionally and could see how it was supposed to be funny, but for me, the film just didn’t work. I was very disappointed because I expected more from these actors.

The film revolves around Anglo-American relations and jewel heist. The heist is at the beginning of the film, where a crew of two Americans, Wanda (Jamie Lee Curtis) and Otto (Kevin Kline), and two Englishmen, George (Tom Georgeson) and Ken (Michael Palin). Once the jewels are stolen, Otto and Wanda call the cops on George, who is immediately arrested. However, he’s the only one who knows where the jewels are, so Wanda gets busy trying to seduce his lawyer, Archie Leech (John Cleese), whom George would logically tell.

Most of the humor (and “humor”) comes from the perceived differences between English and Americans. The English are characterized as absurdly repressed, while the Americans are the opposite but far less sophisticated at the same time. These differences get more specific with each character. Ken is a stutterer who loves animals but can’t really stand up for himself (for some reason we’re supposed to find it funny that he is forced to commit and witness harm to animals throughout the film, just because it goes against his nature). Otto is a classic ignorant American, a pseudo-intellectual consumed with jealousy every time Wanda has to seduce someone. Admittedly, Wanda feels that it is necessary to seduce almost every male in the movie, and has a fetish for foreign accents and languages. At first it appears to be just Italian, but plot twist, Russian gets her hot too! Finally, Leech is comically repressed, easily dazzled by Wanda, and seemingly unable to escape his loveless marriage.

As I said in the intro, I did laugh a few times in this movie, but it far less than the movie wanted me to. I think this is mostly down to pacing; the comedic timing just didn’t hit for some reason. That’s why a lot of the older screwball comedies still hold up for me, the timing is so fast that you have to work to keep up. You’re laughing at a joke that whizzed by a few seconds a go, and that in itself is funny to me. A lot of times this movie just felt so slow, like they were afraid audiences wouldn’t have time to get the jokes.

Sometimes I think I’m just too softhearted for this sort of comedy. The treatment of Michael Palin’s character in particular had me thinking this. He is routinely harassed by Otto and even tortured by the end. He has this weakness for animals that works against him in his criminal enterprises, but it’s really sort of endearing and to have the film present it as a weakness was kind of sad to me for some reason. His whole subplot is him trying to kill a witness who could convict George: this old lady with four dogs. In his attempts to kill her, he only ends up accidentally murdering the dogs. I guess this is supposed to be funny, but I just found it sad. Maybe I need to lighten up a bit, I don’t know. His stutter is also played for laughs, which seems pretty insulting as well. 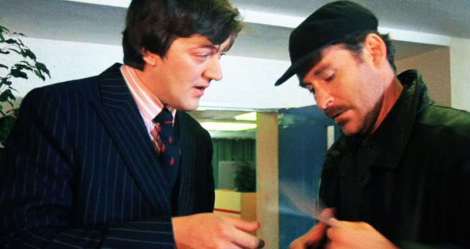 In contrast, the movie’s attempts to make fun of Otto were much appreciated, because he was such a ridiculous and callous character. His belief in American superiority is justly made fun of in my favorite scene in the film. When he pathologically follows Jamie Curtis and John Cleese and pops up right between them before they can kiss again with his signature line (“Don’t call me stupid!”) I laughed quite a bit. There’s another great scene revolving around that line where Curtis patiently explains just how stupid Kline’s character actually is. In short, Kline’s character deserves to be made fun of, not to make fun of Palin’s character. At least he gets his comeuppance by the end.

I can see why people would enjoy A Fish Called Wanda, and I did like it in spots, but unfortunately it mostly fell flat for me. So much of humor is personal taste, and I’ll admit I could have just been in the wrong mood when I watched it, which does happen. I’ll stand by what I’ve said in this review though, sometimes the film just seems to be making fun of the wrong things and the pacing seems a bit off. I did have some laugh out loud moments, but they were few and far between. I see what the film was going for, but I just didn’t go for it.