The Grand Budapest Hotel‘s main attraction is Wes Anderson’s style. As per usual, it’s a bit hard to get meaning out of this film because you’re too busy being delighted by all of Anderson’s quirks. This is both a compliment and a criticism. Practically tied with this is the plethora of cameos Anderson has assembled. Almost every side character is recognizable, and it’s quite fun to identify them all.

On the verge of World War II, the Grand Budapest Hotel is starting to fail. The concierge, Gustave H (Ralph Fiennes) hires a new lobby boy and protege, Zero (Tony Revolori). When one of the patrons of the hotel, Madame D (Tilda Swinton), is murdered, she leaves an expensive and famous painting to Gustave. Her son, Dmitri (Adrian Brody), contests this, and suspects Gustave of murdering his mother in order to get the painting, when in reality, he committed the crime. What ensues is Gustave and Zero trying to protect the painting from Dmitri and escape before World War II begins. 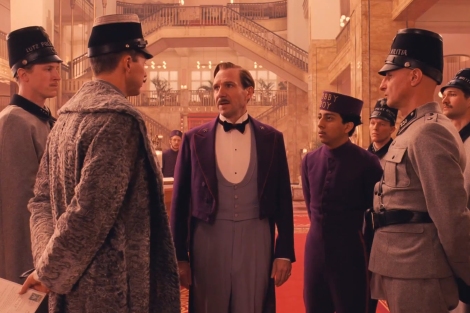 The heart of this film is really the relationship between Zero and Gustave. It’s great to see them bond over the course of the film. The film is constructed in multiple frame narratives, contributing to the film’s themes of aging and decay, along with the death of decency and civilization. The whole film has a feeling of nostalgia, enhanced by the films’ reference to 1932’s Grand Hotel (though thankfully this film is quite a bit better than that one), and the titles throughout the film echoing those in The Red Shoes. Like society and decency, Gustave and Zero’s relationship eventually meets its end, giving the film a slightly regretful tone. However, most of the film is incredibly enjoyable and humorous, and never gets too heavy. Something that shocks me, even on the second viewing of this film, is how violent it is. It’s not violent compared to most films, but when I think of Wes Anderson I think of bright colors and quirky characters, and forget that his films can be unexpectedly harsh at times.

Like Grand Hotel, The Grand Budapest Hotel has an endless parade of famous people. Literally every time you turn around, a famous actor or actress pops up, whether it be Jeff Goldblum, Tom Wilkinson, Ed Norton, Harvey Keitel, Jude Law, Willem Dafoe, or of course, Bill Murray. There are many more. It’s not the deepest analysis of a movie to say “oh it’s cool because of all the famous actors who have cameos,” but it’s still incredibly entertaining to recognize all of these famous dudes when they do show up. 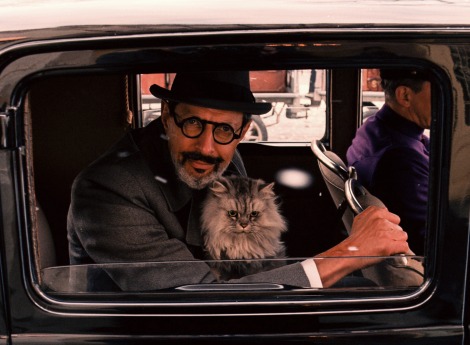 As always, Anderson’s unique style is the main takeaway of the movie. He makes good use of models here, especially for the outside of the hotel itself. Everything is brightly colored (usually pink as that’s the hotel’s color) and looks as delightfully artificial as ever. Characters communicate through elaborate note passing and romantic poetry. It’s clear, just as in Moonrise Kingdom, Anderson has made up his own world for the story to take place in, one that is uncannily similar to our own but also startling different. Moonrise Kingdom was clearly 1960s New England, but also something completely different. The Grand Budapest Hotel does the same thing with 1930s Central Europe. The names of things are all made up German sounding things, and the whole thing feels like a storybook made into a movie. I’ll probably never really 100% get what Anderson’s doing, but it’s so enjoyable that it doesn’t end up mattering that much.

The Grand Budapest Hotel is as good as anything that Anderson’s ever done, and better in some ways. His style still completely baffles me, but there are some recognizable themes to get out of this thing, which is always nice. Ralph Fiennes turns in a great performance, adapting himself well to Anderson’s cinematic world. While I wouldn’t say it’s my favorite Wes Anderson film, The Grand Budapest Hotel is wonderful, and very close. 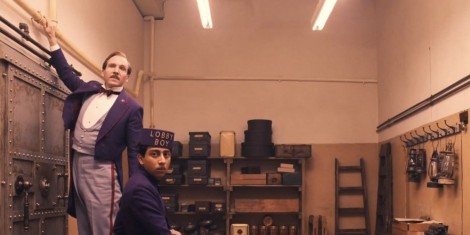 “Get your hands off my lobby boy!”

4 responses to “The Grand Budapest Hotel”