Full Metal Jacket has a lot of good things in it, but unfortunately they don’t add up to a good movie. I know this movie gets a lot of love, but honestly, I don’t see it. Sure, the beginning is pretty hilarious if you like over the top profanity, but the second half is just dull, and the whole things ends up being pretty pointless. Though technically it’s interesting, the story leaves something to be desired.

The film follows Private “Joker” (Matthew Modine) through basic training and into the Vietnam War. The first and superior half of the film is focused on a battle of wills between the overweight and hopelessly incompetent “Pyle” (Vincent D’Onofrio) and Sergeant Hartman (R Lee Ermey). We witness the marines being stripped of their individuality and taught to kill at the expense of all else. After the conflict between Hartman and Pyle reaches an explosive climax, we see Joker shipped off to Vietnam as a journalist. He follows around a platoon, which meanders aimlessly through the war, until being caught in sniper fire towards the end.

The first half of the film is not the most riveting thing you’ll ever see, but it is pretty entertaining. As a fan of creative profanity, I enjoy it quite a bit even though it is pretty offensive and not everyone will have a good time watching it. The discipline Hartman imposes on the men is pretty harsh, but of course this is the marines so it’s to be expected. It’s hard to feel any sympathy for these characters against Hartman, because Kubrick has a hard time creating fully human characters. They almost always seem like robots and, besides Hartman and Pyle to a lesser extent, this film is no different. It seems like he’s trying to make an anti-war statement about how war takes away one’s humanity and leaves only man’s animal nature behind, but it’s hard to really feel that because the characters are all so robotic throughout. This type of acting/characterization is not always a problem; it’s extremely effective in both Barry Lyndon and 2001, but here not so much.

The second half of the film is a strange mix of your standard war film and a Kubrick picture. On one hand, he employs slow motion and zooms, involving us in the action a bit more. He tries to abandon the rigid compositions that he used in the first half, but doesn’t quite manage it. There are a lot of testimonials that are very staged, which works in the film, but also doesn’t in a way. He walks a fine line between involving us in the action a bit more realistically and distancing us from it with the camera work. The camera still moves with the actors, and tries to get in there, but is still very fluid. It’s strange because you can’t really figure out how to orient yourself to the characters. So after that, you just sort of loose interest because the acting/characters don’t pull you in at all.

The whole film is supposed to be about the duality of man, which is explicitly stated by Joker in the film itself. Not only is this lazy storytelling, but it wraps up a very complicated issue into one line, making the rest of the film irrelevant in a way. The whole film’s structure, as well as many other symbols in the film, already illustrates this. It’s somewhat irrational how much this one line upsets me, but it upsets me a lot. Kubrick breaks a lot of normal rules of storytelling, and usually he can get away with it, but in the second half of this movie it doesn’t quite work out.

So Full Metal Jacket is far from my favorite movie, but there are a lot of redeeming qualities. The camerawork is pretty interesting, the first half is entertaining, but it doesn’t really lead much of anywhere. There are a lot of good lines and moments, especially in the first part, but the second half is really boring and unfocused. Kubrick’s already done a great war film, so see that one. 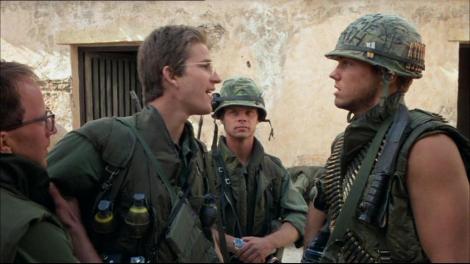 “Because Marines don’t have permission to die!”