This post is part of the SPIELBERG BLOGATHON hosted by Outspoken & Freckled, It Rains… You Get Wet, and Citizen Screenings taking place August 23-24. Please visit these host blogs for a full list of participating blogs. 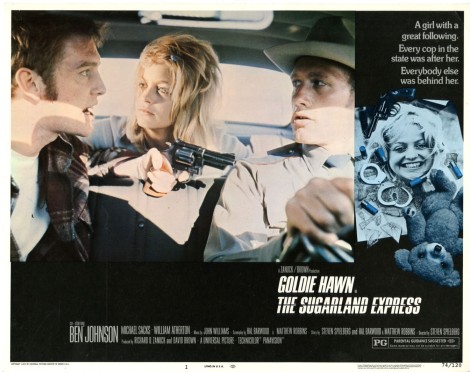 For the Spielberg Blogathon, I’ve decided to take a look at where it all began. Though Spielberg had directed shorts and for television previously, 1974’s The Sugarland Express was his debut feature film. It has understandably been overshadowed by his later projects, including Jaws directly after, but nevertheless The Sugarland Express is a technically impressive film with a lot of heart, and an impressive film even for a veteran. It’s not perfect, but it’s pretty damn good.

The Sugarland Express is the based on a true story of two parents who go on a quest to be reunited with their child in foster care. Lou Jean Poplin (Goldie Hawn) breaks her husband, Clovis Poplin (William Atherton), out of a pre-release facility with 4 months left on his one year sentence for robbery. They end up kidnapping a highway patrolman, Officer Slide (Michael Sacks), and using him as a hostage to drive to Sugarland, where there two year old son is living with his foster family. The state won’t turn him over to his biological parents, so they decide to go get him. They are escorted by the highway patrol, and citizens all across Texas encourage them in what they see as a mother and father fighting for their child.

The interesting thing about this film is that it sets up a lot of Spielberg’s favorite themes right from the outset. The whole film is about a yearning to return to a stable family. Frequently members of the highway patrol will observe that the Poplins seem like children themselves, and this is underscored by their ignorance of how to kidnap someone and hold them hostage (they do it well enough, but a lot of time is spent debating what to do because they have no idea), their general lack of foresight, and especially a scene in which they watch cartoons at a drive in and wish they could get drunk. The parents are like kids themselves, but they desperately want their kid back, and to preserve a sense of family.

One of the drawbacks of this film though, is that it focuses more on the characters’ desire to get their son back, rather than on why they are doing this or why they are focused on accomplishing this in the way that they are. I wanted a bit more character development. The Poplins are given a lot of catchy dialogue, but it doesn’t go much deeper than “we want our kid back.” There is sort of an interesting development where Clovis doesn’t really want to go along with Lou Jean’s crazy plan, but even more doesn’t want to loose her, so he does go along. He seems to value Lou Jean more than his son, probably because he hasn’t gotten a chance to know him that well. This is only touched upon in a few scenes and never explained fully. I think the film would have been greatly improved with some insight into the Poplins and their decision making process, because the film has basically everything else going for it. 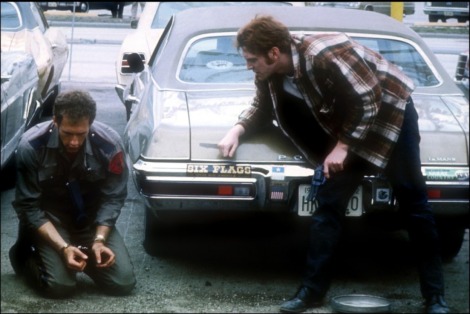 The film is incredibly enjoyable. It has sort of a Bonnie and Clyde or Badlands feel to it, as it mostly consists of a young couple on the run. While the southern accents might be annoying to some, after a while I got used to them and found them funny and endearing. There is also a good bit of humor involving an elderly couple. This film marks another first: Spielberg’s first use of a John Williams score. While it’s not as symphonic as his others, it’s still very good and fits the story well. It sticks in my mind even now.

There are a number of really visually interesting shots. Spielberg makes sure that even though most of the film takes place in a car, things never start to look dull. There is one shot from inside the Poplin’s car that shows the highway patrol car riding up next to them, then in front, then around to the next side. It’s a very fluid shot, and it looks really cool. Another is similar to those mash ups that usually show two characters talking on the phone, only it uses a rear view mirror to show the highway patrolman looking back at the Poplin’s car.

The film could have used some more character development and less car chases, but the car chases for the most part are pretty cool. Spielberg keeps things visually interesting even when the characters are in a car for at least half of the film’s run time. It’s an interesting story about two folks who bend the law to preserve their family, foreshadowing themes Spielberg would investigate again later (I’m mostly thinking of one of my favorite Spielberg films, Catch Me if You Can). The film could have been a bit better, but all in all it’s a very satisfying debut from Mr. Spielberg.

“And you ain’t no mental subject neither.”

6 responses to “The Sugarland Express”