A Clockwork Orange is a film that I have been dreading to watch, and now having seen it, am glad that I have it behind me. I’m sure I’ll have to watch it again someday, but at least the initial shock is over. Yes, I looked at watching this film as a chore, and it was. I finally do have to admit it’s a good film, and I got a lot out of it, but it’s not exactly enjoyable in any traditional sense of the word. While other films containing obscene amounts of violence are still “enjoyable” because they are good films, I can’t say the same for this one.

Alex (Malcolm McDowell) is a horrible and sadistic criminal, an addict, rapist, and housebreaker who has just graduated to murderer. He lives a grotesque social landscape of futuristic Britain that matches his crimes. When his gang turns on him, he ends up in prison. In order to get out, he reads the bible and sucks up to a priest (Godfrey Quigley), who recommends him for a new treatment. This treatment turns out to be sadistic brainwashing instead of therapy, and Alex is conditioned to be physically sick at any thought of sex or violence, and coincidentally, the music of his favorite composer Beethoven. When he gets out, he is helpless to defend himself against those he formerly terrorized.

The intended moral of the film is obvious, and is stated outright by the same priest who put Alex in the treatment in the first place. Though Alex has been outwardly “cured,” this is morally and philosophically irrelevant because he has not chosen to do so, he is simply physically unable to act out violence or have sex. This is obviously a very flawed cure, but it does have the intended consequence of stopping Alex’s previous behavior. He’s not cured, but society may be a bit safer. Of course, a terrible wrong has been done to Alex, now that he has to live in constant pain, considering he is constantly met with violence at every turn once he gets out and cannot protect himself.

Much has been made of Kubrick’s use of the wide-angle lens. It distorts the edges of the frame, making the point that Alex’s surroundings are perverted. This is true, but Alex is perverted as well. Kubrick stops short of distorting Alex’s image as well, but one could argue he doesn’t have to. Kubrick can give us all the plucky narration he wants, but I defy anyone who can get behind Alex after seeing his actions. They don’t have to be distorted by cinematography; the acts themselves are already distorted by their very nature. 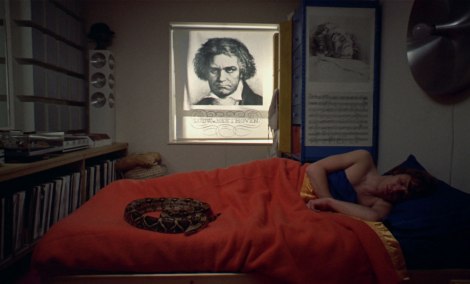 I really cannot decide if the picture is glorifying its hero or not, but regardless, I refuse to glorify him. Just because he has suffered does not make him a good person. The treatment he undergoes is cruel bullshit and everybody knows it, but all the same he learns nothing from it. He may speak like a misbehaving child, but his actions are far more serious. He has no empathy and gains none, even after all he has suffered. The film is correct in stating that he cannot become good because he doesn’t want to. Is it society’s fault that is the way he is, quite possibly, as there are almost no moral characters in the film. There are characters like Alex who actively do harm and don’t care that it’s wrong, there are authority characters who may or may not think they are helping matters but they aren’t, and there are passive victims. No one is actively good. Placing blame on anyone in the film becomes a chicken and egg problem: both authority figures and the criminals are so terrible that it’s impossible to tell who is harming whom more. 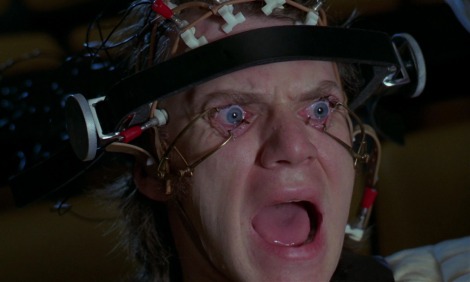 There is an interesting sequence at the end, the last in a line of Alex gets out after treatment and defenselessly meets revenge scenes. He stumbles into the house of a man (Patrick Magee) whom he has previously beaten so much that he is now in a wheelchair, and his wife has died after Alex raped her. The man doesn’t realize Alex is the same man until he begins singing “Singin’ in the Rain,” which he also sang as he terrorized the man and his wife. The man retches horribly, just as Alex does when confronted by violence. This links Alex with his own torturers. Any viewer of this film can’t forget that even though Alex’s pursuit of violence has been ruined, he’s also ruined countless lives in much the same way.

As usual, I’m not quite sure what to make of this film. The main problem I have with it is not its depictions of violence, its repugnant hero we are supposed to be rooting for, or its questionable distinction between Alex and the sick society he lives in. It is that the questions the film inspires are more interesting than the film itself. I got much more out of reading reviews of this film than its actual consumption. Something’s wrong there. But, at the end of the day, all the ideas did come from the film, and that’s got to count for something.

7 responses to “A Clockwork Orange”