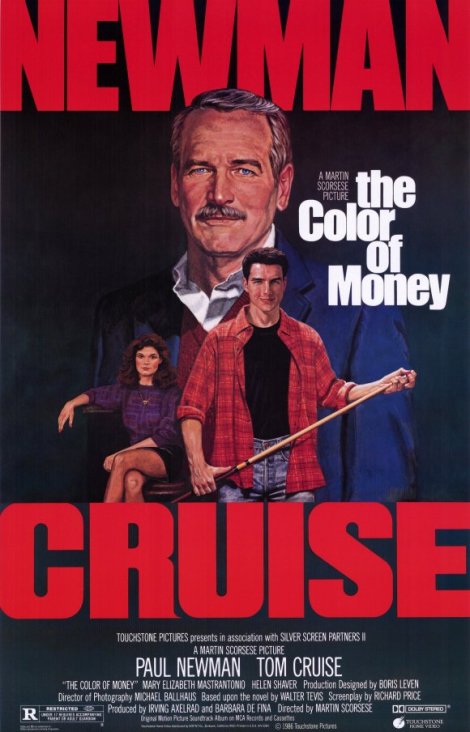 The Color of Money may be one of Scorsese’s less popular films, but it’s still a pretty good one. I would definitely not call it great by any means, as it settles into genre conventions pretty well by the end, but it is definitely entertaining and the beginning is really good. I did watch it just to check off another film on Scorsese’s filmography, but I don’t really have any objections to seeing it again sometime.

“Fast Eddie” Felson (Paul Newman) used to be a pool hustler, but now he’s a liquor salesman. He’s doing pretty well for himself, but the problem is he’s bored. He spots a young kid, Vincent Lauria (Tom Cruise), doing pretty well at pool and decides to take him under his wing. He bankrolls him and his girlfriend Carmen (Mary Elizabeth Mastrantonio) to a tournament in Atlantic City. He teaches Vincent along the way how hustle, because he already knows everything he needs to about pool. Eddie decides to play pool one day and gets hustled pretty bad, then realizes he is tired of playing the mentor and really wants to get back to playing pool. 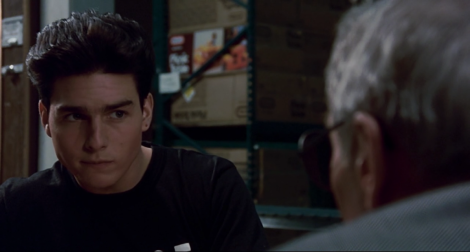 Like I said, the first part of the film is pretty darn fascinating. There’s a fair amount of manipulation directed at Vincent, coming from both Eddie and Carmen. He doesn’t even really seem to realize it. Eddie gives him his prized pool cue and convinces him that Carmen will probably leave him if he doesn’t go on the road. It’s probably true, because she seems to be getting pretty bored as well with the situation that they are in. She and Eddie are all after the money but Vincent, not so much. He has a lot of trouble with loosing on purpose and learning how to play people (as opposed to playing against them). For him the game is pool, not hustling. Eddie has to try to teach him how to get past this, and it’s a real struggle for the first half of the film. There’s a wonderful scene where Eddie lets some other guys beat up Vincent in order to teach him a lesson. Carmen gets right away what needs to be done to make money, but it takes Vincent a lot longer. This is the interesting part of the film for me, as we get to see the group dynamic that is developing here, and how the control of it gets passes around.

The second half of the film is not so interesting. It focuses mostly on Eddie, after he gets hustled (by a young Forrest Whitaker) and the group breaks up. His character and Vincent almost make a complete switch, while Carmen is unfortunately relegated to the background. Eddie becomes more focused on winning games outright, while Vincent is concerned with making money. I suppose there’s nothing wrong with this really, as it shows the effect that the relationship has on both of them. However, it didn’t come across as fully believable to me somehow. I’m not even really sure why, but I just wasn’t buying that Eddie suddenly had a change of heart like that, just because he got hustled once. Everything was really interesting in the first half with this conflict between the two outlooks on playing pool, while in the second half it just became that standard sports movie thing of “winning the big game.”

A truly great aspect about this film though, is the way Scorsese shoots the pool games. He does for pool here what he did for boxing in Raging Bull. The camera moves in very interesting ways during the matches, following the balls smoothly. There’s a really cool one where they’re starting the game and the camera tips up really fast. In another match, the balls are all shown in close-ups, and then followed, so the balls are all you can see. It’s pretty interesting to watch and really gets you involved in the games.

The Color of Money is above your average sports movie, but unfortunately it’s still below your average Scorsese film. He shoots it really well, the performances are pretty good, but the story and the characters end up in weird places given where they started. Though it may have helped me to understand where Eddie was coming from if I had seen the first film (1961’s The Hustler), I still find it strange that he did what he did. It makes sense objectively, but when I was watching the film I found it a bit unbelievable. Still, it’s a very entertaining movie with some great camera work.

“Money won is twice as sweet as money earned.”

11 responses to “The Color of Money”