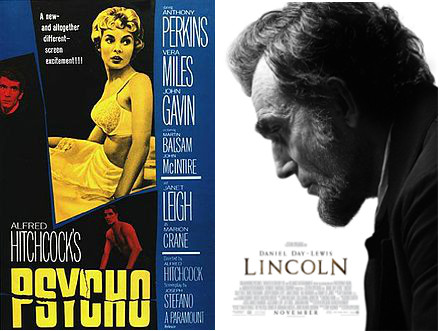 You know, I’m just realizing now that if you combine these two films, you would probably get something somewhat similar to Abraham Lincoln Vampire Hunter. Though outside of rewatching them over the same two week period, I don’t think they should really be combined in any way. 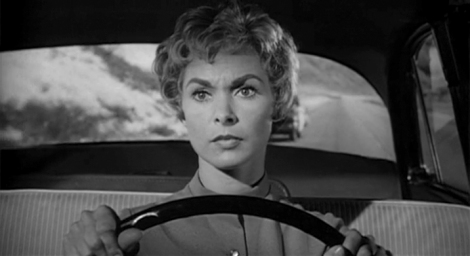 I still do really like Psycho and think it is one of Hitchcock’s best, but it was definitely better the first time around. Though I went into it the first time knowing absolutely the whole story and still experienced the stomach clenching suspense, the second time this didn’t happen as much. It seems that knowing the story ahead of time isn’t enough to kill the movie for you the first time around, but the second time around it comes close. I still appreciated the film and enjoyed myself, but it was hardly suspensful at all. The reason I came back to this film is because I missed watching a Hitchcock on Alfred Hitchcock day, which did not make me too happy, and also I had just seen Stoker the night before and with all its Hitchcock references, probably half of them to Psycho, I figured that this would be the Hitchcock film to go with. Just a word of warning to those who haven’t seen Psycho, avoid all spoilers, even if you are tempted not to, because even if they don’t bother you the first time around they might on the second, if that makes any sense at all. I still had a lot of fun with this film though; I just was not scared in the least. I love the title sequence here; it may be the best one out of all of Hitchcock’s films. The jagged lines moving to the intense music; it’s great. Also there was a part here that kind of reminded me of Pulp Fiction, which of course I hadn’t seen the first time I watched Psycho. The part where Marion’s driving away with the money she stole and sees her boss crossing the street right in front of her reminded me of the part in Pulp Fiction when Butch goes back to get his watch and then he sees Marcellus Wallace crossing the street right in front of him. Of course what happens later is different, but that one moment seems pretty similar.

I’m so glad Lincoln didn’t win best picture last year. It looked like it was going to there for awhile, but I didn’t want it to win then and I’m still glad it didn’t. It’s a good film and all, but I would have been resenting the heck out of it the whole time I was watching it and would have had about zero fun. As it was, this time was not as fun as the first time, that’s for sure. The first time I saw it, I didn’t really see how everyone else was thinking this was too long; I was never bored during it and didn’t look at my watch once. Not so this time; I actually had to take a break in the middle to get some food because it was taking forever and I was getting really hungry. I fully agree with those who were saying that the film should have ended on the passage of the amendment, because that really was the climax and everything after that was just gratutious and a let down. I still felt a great sense of pride and acheivement when it passed, but then Spielberg took it away again with all of the stuff afterwards. Also, Sally Field really bothered me. I did not care for her character or her portrayal, add that to the fact that it was distracting from the good stuff in the film and it was really a major annoyance. The music was also very cheesy at some points, and I still can’t believe that Williams was nominated for an Oscar. I like the guy in general, but jeez. He did not deserve it for his work here in my opinion. I know I’m coming down hard on this thing, but it’s probably because I was way too nice to it the first time. I still got a kick out of those three guys buying off votes, Lincoln telling his stories all the time and some people getting sick of it, and the history and debate aspects I really like unlike a lot of people who have a problem with this film.  Also I still loved Tommy Lee in this film; he’s playing his normal character but I liked it just the same. And of course, Daniel Day-Lewis was still great. I noticed a lot of problems with this film that I didn’t the first time though.

This was not as sucessful as my previous rewatches unfortunately. I still liked both films but their effects definitely seem to have worn off since the four or five months it’s been since I first saw them. A lot of problems stood out in Lincoln, and though there were no real (new) problems I noticed in Psycho this time around, the suspense was hardly there. Hopefully next time I’ll have some better ones.