Man, this movie is really sixties. From the second it starts up you see a plane coming in, in all of its technicolor glory, and this schmaltzy sixties song comes on, and I’m like “oooh boy”. The movie manages to escape the problems of being stuck in the time period by having some really great actors turning in some really great performances, and the strength of the characters and the issues they are facing. But when that poster says “a love story of today” they are of course talking about 1967 and the film never lets you forget it. It’s not necessarily bad that it feels so sixties, you just definitely have to keep the time period in mind when you are watching it, not like you have any choice.

Joey Drayton (Katharine Houghton) is a young woman who is way too perky and cheerful for her own good. She met Dr. John Prentice (Sidney Poitier) in Hawaii, fell in love with him in a mere twenty minutes, and is now bringing him back to meet her parents. From the opening shots of them getting off the plane you can tell they’re in love, even though it’s a little corny, it’s still pretty cute. John’s worried though, because although Joey doesn’t think her parents will have a problem with the fact that he’s black John’s not so confident. They’ve only known each other for ten days, and Joey’s just going to go home and spring this guy on her parents. I don’t care who you’re marrying, you have to give the folks back home a little more warning than that.

That was one of my problems with this movie; Joey keeps doing things very spontaneously and doesn’t even stop to think whether ot not it might be a problem for other people. I understand that she’s in love with this guy and really excited to get married and all, but still. You can’t keep springing things on people like that. She doesn’t just do it to her parents. She does it to John as well. She also wants to get married really fast, like in a couple of weeks. John has to leave for some doctor thing in New York that very same night, so when they ask for her parent’s approval, it has to be quick. The whole thing is riddiculous in a way, because really they could just get married later. If I was John I would have been like, “okay, hold up. I love you and all but we don’t have to get married this second and I won’t even marry you at all if you don’t calm the heck down.” She puts him into a lot of awkward situations and then he doesn’t have the guts or heart or whatever to tell her that it bothers him; he just goes behind her back instead (more on that later). The film focuses on the problems they and their future children are going to have because of their racial differences, but nobody acknowledges the problems these two are going to have because they just don’t know each other well enough yet.

They meet the Drayton’s maid, Tillie (Isabel Sanford) first. You guessed it, she’s african american. She’s not too impressed with John, thinking that he’s just marrying Joey to advance himself or something. Next they meet Christina (Katharine Hepburn), Joey’s mother. She is shocked at first, but gets caught up in all the romance of it and just wants her daughter to be happy. Then Matt (Spencer Tracy) comes home, and he doesn’t know what’s going on either. He is much more cautious about the whole thing when he finds out. Once he’s ascertained that John is indeed a good person, he is still worried about the problems caused by their racial differences. Then John tells Christina and Matt that though Joey says they are going to get married no matter what her parents say, John doens’t want to marry Joey unless her parents wholeheartedly approve. He doesn’t want to cause any problems between Joey and her parents. That’s nice and all, but I really didn’t like how he went behind Joey’s back. He doesn’t even tell her that he’s doing this, when she clearly doesn’t want him to. Instead he puts all the pressure on Matt to decide their fate, when he really should have talked it out with Joey more.

If you’re driving down the road and one of your tail lights are out, you obey the speed limit so as not to draw attention to yourself. I felt that this movie was kind of like that. It was willing to make a big issue of race but it was afraid of (or simply not concerned with) attacking anything else. I mean, from a modern standpoint we can only expect so much of 1967, and I’m sure this movie was taking enough risks already having the interracial couple wanting to get married and all. Maybe just because I’m female and not black, I was pretty annoyed how they handled all the female characters. I might be coming across as kind of harsh, but it seemed like all the female characters were in lovey-dovey la la land while the male characters had a good head on their shoulders and were the only ones that appreciated the challenges Joey and John were up against. To be fair, there was a Catholic Priest (Cecil Kelloway) who was all for them getting married, but in terms of the parents it was split male/female. The two mothers were all like “remember what it’s like to be in love….!” and the fathers were all like “this is never going to work in the world with in and everybody would realize that if they thought about it for two seconds.” The film ultimately presents the female viewpoint as correct, but it’s not really accepted as practical (or at least practical enough) until the men, specifically Tracy’s character as the adult white male, deem it as such. So while this film probably was pushing some boundaries back in ’67, don’t expect it to be the most politically correct thing ever in terms of today. I don’t know if the film’s out to change the entire world or anything, maybe it’s just trying to show that interracial marriage can work in some situations. As Tillie says, “civil rights is one thing, but this here is something else.”

The set up for this film is kind of contrived, not the interracial marriage part but the constraint that Matt has to decide his daughter’s future without her knowledge all over the course of one day is pretty preposterous. What would really happen is that if the two of them really wanted to get married, they would get married right away. Otherwise the parents would convince them to wait a little while, everybody would get to know each other and be used to the idea, and then they would get married just like anybody else. As ridiculous as it may seem, the story really needs the deadline otherwise there would be nothing really driving the story. The fact that Matt doesn’t immediately go for it is the point; he’s been raising his daughter to be this liberal and espousing these ideas in his newspaper his whole life, but it’s a bit harder in real life. It’s easier said then done so to speak, living up to one’s ideals and everything. If he had all the time in the world to decide there would be no drama. So while I understand why they did this; it still seems a bit contrived. However, this problem doesn’t amount to much because the drama is so powerful. 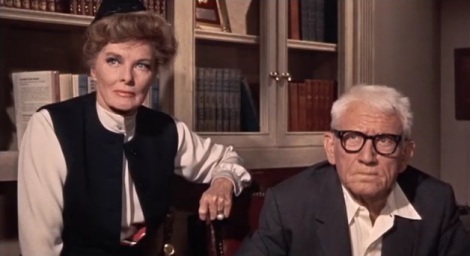 Whenever someone new comes into the picture, you’re basically wondering how the other characters are going to react to their race and also whatever their feelings on the marriage are. First it’s Christina, then it’s Matt, and finally it’s John’s parents (Roy Glenn and Beah Richards). It all reaches the climax at the end, where everyone comes together in one place and Matt has to make his decision. Putting all of these aspects in such a sort time makes for a pretty high pressure situation. Earlier on, there’s a surprise visit from someone at Christina’s work. She shows up basically to see who this black guy is and what he relationship is to them. Christina is still getting used to this herself, but her employee’s reaction helps her put things in perspective. That scene is just so great; I’m not going to tell you what happens but just know that it’s one of the greatest scenes in the movie. It really shows you how the characters interact throughout the whole thing. The film really is based on the uncertainty of how other people are going to react, and Kramer does all he can to enhance this by springing things on the characters and keeping them off their balance.

The casting for this film is brilliant. Hepburn and Tracy were never married, but they made nine films together and had an affair for about twenty-five years. Hepburn was raised by liberal parents who were probably somewhat similar to Matt and Christina. Katharine Houghton is actually Hepburn’s neice; she really looks like she could be her daughter though. I’m guessing there was no actor better equipped to play a stand-up african american guy than Sidney Poitier back ’67. Not that other people couldn’t have done, but Poitier was established enough for people back then to actually believe him playing his character. It’s kind of disappointing that they didn’t get bigger name actors for John’s parents, but the sad fact is there probably weren’t any. Nevertheless, the two of them do a fine job and hold their own against these famous white guys.

Guess Who’s Coming to Dinner kind of has a ridiculous premise, but nevertheless makes for some great dramatic situations. The key is to focus on the characters and not the political correctness of it all; you might be disappointed. It was made in ’67 and the film doesn’t make any effort to try to escape that fact. It’s trying to be about the time it’s in, which is perfectly fine. As far as I know (not having lived through it), it does this pretty effectively. Though they are probably pushing the racial issues as they intended, they play most other things on the safe side. The performances are all great, and there are some inspiring and humorous moments along the way. It’s a good film, despite having some flaws. 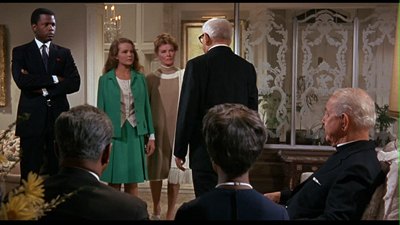 “I don’t think I’m going to faint, but I’ll sit down anyway.”