Yes! I finally found a Tarantino film that has a constant level of I-can-endorse-this all the way through the movie! Though Jackie Brown is not the best Tarantino film, he seems to be playing it safer here and I definitely appreciated it. There wasn’t any of that waiting in uneasy suspense for the moment to come along, which is very exciting in its own right but is also very nerve-wracking to deal with. With Jackie Brown I just sort sat back and relaxed and enjoyed the film without worrying about the pressure of potentially not liking it, which did not even happen. I liked it all the way through! Yay! Though it also didn’t really have any moments of me thinking that this was quite possibly the greatest film ever, I was fine with it because finally I could just sit down and watch a Tarantino movie without getting too worked up.

Jackie Brown (Pam Grier) is a forty four year old black woman, “gainfully employed” as a flight attendant on a crappy old Mexican airline. One day she gets picked by these two cops: Nicolette and Dargus (Michael Keaton and Michael Bowen). They look through her stuff and find fifty thousand dollars and some drugs. They arrest her and let her spend the night in county while she decides whether she’s going to help them or not. It looks like not. Meanwhile, Ordell Robie (Samuel L. Jackson) is looking to post bail for Beaumont (Chris Tucker), who works for him. He goes to Max Cherry (Robert Forster), a bail bondsman, and sets the whole thing up. He gets Beaumont out and convince him to do a favor for him. He actually ends up killing him instead, so that when Beaumont actually does go to court he won’t be able to rat him out. We don’t know it quite yet, but this is the guy Jackie’s going to be up against. We also meet his friend that he did time with awhile back Louis (Robert De Niro), and his girlfriend Melanie (Bridget Fonda).

Ordell finds out that Jackie’s been arrested and sent to jail, and goes back to Max to try to get her out. Based on the previous time he did this, I wasn’t feeling too confident in Jackie’s future. Max does get Jackie out of jail for the time being, and sure enough Ordell is waiting for her. This is a really great scene because although we already know that Ordell is a force to be reckoned with, we don’t know much about Jackie yet so we’re still worried about what’s going to happen to her. Don’t worry, it’s clear that she’ll be fine by the end of this scene. She develops a plan with Ordell to get more of his money out of Mexico, right under the eyes of the cops that are watching her. 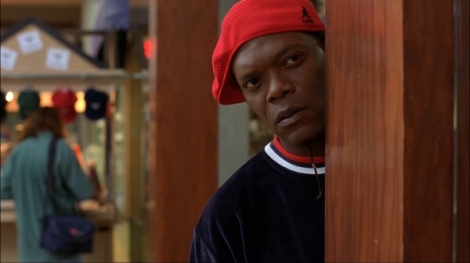 The next day Max comes over, and she enlists his help in the scheme. She wants to keep the money for herself, but she needs help to pull her plan off. I’m still kind of confused about the particulars of the plan, but I think I’ve mostly got it. You will have no chance to call me out on this though, because I’m not going to ruin the surprise. She then goes to the cops and says she’s going to help them get Ordell, whom she knew they wanted all along. It’s unclear at this point exactly who she is actually helping and what exactly is going to go down, but it’s fun to watch this develop over the course of the film. Basically the rest of the film is a “trial run” of the money drop, and then again “for real this time.”

Though it seems like a simple plot, and it pretty much is, there are a lot of twists and turns. They’re not overly dramatic or shocking, you kind of expect that there will be some because of the way Tarantino sets it up but you don’t know exactly what they will be. I was a bit worried that with a running time of about two and half hours, I was going to get bored with it or Tarantino was going to start going crazy towards the end. I am happy to say this is not the case; I hardly noticed the time go by because the story and the characters pulled me in so well. Like I said before, this isn’t like any of Tarantino’s films that I have seen thus far. It’s less violent than the rest of them. People still get shot and everything, it’s just not as frequent. Also, people only get shot; there’s no ears getting cut off or scalping or any of that messed up stuff. I don’t think anybody’s likely to come away from this thinking it’s the greatest thing they have ever seen. There’s nothing here really to make the clouds open up and the audience exclaim “Tarantino is a cinema god!” but it will keep you entertained within a minimum of emotional damage.

The only real complaint I have with this film is how he used De Niro. When I found De Niro was in this film, I was thinking he was going to be fantastic. Tarantino and De Nero seem like such a great pair so I was kind of disappointed when De Niro wasn’t given much to do. His character is present all throughout the film, but doens’t really do much besides get high and look confused until the very end. De Niro wasn’t bad here or anything, it’s just I was expecting more of him and was surprised that he didn’t get to do much. Also I was sad that Tarantino didn’t have a cameo; apparently he was the voice on the answering machine but I didn’t realize it was him at the time. It’s kind of funny because when it came on I was thinking “hey, I bet that’s somebody important” thinking it was gonna be some old-timey actor I had never heard of or something. Well, I was only part right; it was somebody important.

One thing about the film I did like however, was the downplayed romance between Max and Jackie. A big deal was not made of it, which I really appreciated. It was really cute, though, I’m not gonna lie. I said that it was probably about four or five times over the course of the film. The cutest thing is when Jackie plays some music for Max when he’s over at her house. It’s this group called The Delfonics, and Max has never heard of them before. So later he goes to the store and buys a tape of theirs (back when people had cassette tapes!) and listens to it in his car all the time. Then Ordell gets in his car and goes, “I didn’t know you liked The Delfonics” and I was about to loose it. Okay, not really, but I did think it was really cute. It’s obvious he likes her throughout the film, and I was worried about Jackie for awhile but she obviously likes him enough to let him help her. Not much comes of it when all is said and done, but I liked it that way. Their relationship was pretty low-key, like the rest of the film. After the intense viewing experiences that the rest of them were, I was pretty okay with this.

I hope it doesn’t sound like Jackie Brown is somehow un-Tarantinoan (is that a word? How do you make Tarantino into an adjective?). I mean, it kind of is, but also not really. You still have tons of profanity; that’s still here. The characters are still great. There is still violence, just not as much. He doesn’t start taking things out of sequence until the end, but it does still happen. The whole thing is kind of a throwback to the ’70s, so there’s that. There is still a great soundtrack, and he does that thing in Reservoir Dogs where you can tell the music is playing in the actual movie, and the characters can actually hear it. Towards the beginning Ordell was driving and the music faded as his car went away, but it came back when his car turned and started driving towards the camera again. I think that is pretty cool. Also, this doesn’t really have to do with how Tarantino does or does not keep to the norm, but he has Jackie travel by map. Ever since Indiana Jones, I’ve been a big fan of traveling by map. I would almost be tempted to recommend this to anyone who is unsure of seeing Tarantino’s films because of the violence. There’s a lot less, plus there’s not a giant pressure to like this one because it’s much less well-known.

I really liked Jackie Brown, especially because it was so low-key and laid back. It’s a film I just watched and liked, like most other films that come along. I guess I would say that though it is less like the other Tarantino films, it is definitely still his and you can tell. I cannot convey the relief that I had once this film was over. I made it through the whole thing without worrying that I wouldn’t like it! So although Jackie Brown isn’t as good as the others, it’s not as shocking either. If I were to make graphs of them (I should actually do that sometime!), the rest would be going all over the place with their ups and downs, and Jackie Brown would just be hanging out in the awesome range the whole time. It’s just nice to see that Tarantino can reign it in somewhat if he has a mind to. Obviously I’m glad he doesn’t do this all time, but I’m glad he at least did it here.