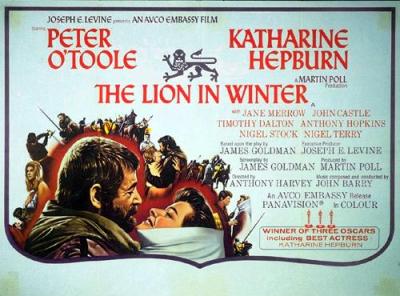 If you mixed The Godfather with Who’s Afraid of Virginia Woolf?, set it in medieval England, and changed all the actors, you would end up with The Lion in Winter. It’s just as great as it sounds. I realize that this desciption also sounds pretty strange, but I used it because the family dynamic is sort of similar to The Godfather, and the love-hate relationship between the two main characters is pretty similar to that in Who’s Afraid of Virginia Woolf?.

King Henry II of England (Peter O’Toole) is your classic king type. He rules over a bunch of land, goes through mistresses like most people go through disposable toothbrushes, yells a lot, and pretty much always gets his way. He imprisoned his wife, Eleanor of Aquintaine (Katherine Hepburn), in a remote castle because he’s just not into her anymore and she keeps leading rebellions against him. They don’t really get too far, but they are pretty annoying. He lets her out on Christmas though, just to be nice, or mean, depending on how you want to look at it. All they do is fight the whole time, but sometimes you get the impression that they are enjoying themselves.

There comes a time in every king’s life where he stops focusing on ruling the kingdom, starting wars, and all that stuff, and starts worrying about who is going to succeed him. Henry’s reached the ripe old age of fifty, and now he’s entered the “I must have an heir” stage. Luckily for him, he has three sons. Unluckily for him, the one he wants to succeed him is the youngest, John (Nigel Terry), and he is the worst choice out of the three. He’s childish, selfish, whiny, and sloppy. Nowhere in that list of unattractive qualities is anything that would make him a good king. Why would Henry choose him then? Well, John is really the only son of his that loves him (or so he thinks). Eleanor, on the other hand, wants Richard (Anthony Hopkins) to be king. He’s probably the best choice out of the three. He’s the oldest, distinguished himself in battle, and looks the part. Technically (I think), it’s supposed to go to him anyway. I don’t really think Eleanor’s really taking this into account though; she mostly wants to get back at Henry for not loving her anymore and keep her land. Then there’s Geoffrey (John Castle), the middle kid who always gets ignored. For the most part, he’s accepted that no one’s rooting for him and is just going to go on the side of the brother that will give him the most power once he becomes king. This changes throughout the film.

To complicate matters, there’s Alais (Jane Merrow). She’s this chick they imported from France, and she’s supposed to marry whoever becomes king. Of course nobody knows who that is yet. For the time being, she’s actually Henry’s current mistress but it’s clear there’s no future in that. She’s actually the only decent one in the whole bunch; there’s one heartbreaking scene where she tries to be mean to Eleanor and she just can’t do it. She just cannot pull it off. She doesn’t really fit in with the rest of them and their manipulation of everybody, and I really kind of felt sorry for her after awhile. It’s clear she just wants to be with Henry but that is so not going to happen. For awhile it was looking like it might, but that was only temporary. There’s also King Phillip II of France (Timothy Dalton), who at first seems like a pushover but later reveals himself to be pretty cunning.

So these characters are all part of medieval English (or French) royalty, and they think very differently than we do now of course. Marriage is very important because it determines who gets control over which piece of land. But marriage is still marriage after all, so you have that to think of as well. Everybody’s making alliances all over the place that change constantly depending on how things are going. Everybody has their own agenda to pursue, and whether it’s selfish or honorable they do their best to fullfill it. Henry wants to get himself an heir, and he wants to make peace with France because he’s just sick of going to war all the time. Eleanor wants to preserve her weird love-hate relationship with Henry, it’s kind of hard to get a handle on it exactly, but it’s like she still wants to be able to see him even though she knows he doesn’t love/desire her anymore. All the sons want to be king and control various pieces of land, Alias wants to marry Henry or at least be with him, and Phillip wants as much of England and the parts of France that Henry controls as he can get. They all go after it with varrying degrees of craftiness that is really fun to watch.

How things are going depends on who allied with who at any given moment, and since this changes a lot, the plot can be sort of hard to keep track of. It’s not too bad though. It’s hard to remember which piece of land that you’ve never heard of goes with which person, and then sometimes it changes so you have that to think of as well. People often do the opposite of what you would expect them to do in order to get what they actually want. For instance, at one point it seems like Henry is just going to give up Alais and have her marry Richard which he was not too eager to do, but at the last second he makes a comment about Richard giving up the Aquintaine (the land that Eleanor promised him in exchange but is technically Richard’s) and he refuses to marry her. Just as Henry knew he would. Eleanor walked right into that one! They are all pretty smart most of the time, but if one person is winning that means another person walked into a trap. This can be a problem if you like almost all of the characters, like I did. It was hard to know who to root for.

All of the acting in this film is brilliant; not only do you have a great cast but they all deliver. Katherine Hepburn and Peter O’Toole are the best though, hands down. Not only are they the most important characters, but they are also the most interesting and they relationship is the most interesting as well. They bring so much energy to their characters and you can tell that they are really enjoying playing off of each other. I believe this was Anthony Hopkins’ first movie; I’m not a giant fan of his but I know they are out there. So if you are one of those giant Hopkins fans you might want to check this out; he’s pretty good here. Similarly, this is Timothy Dalton’s first film and he does a great job. I know I’ve seen him play James Bond before, but I didn’t see the whole movie and I can’t really remember how he did, but he handles his character really well here. It requires him to hold back in the beginning, but by the end you can see exactly how devious he is and Dalton did that pretty well. Also, fun fact, John Barry did the music for this movie, and he also composed the Bond theme song. Lots of James Bond stuff going on here. The other two brothers were very good as well. The guy who played Geoffrey had this really great comic relief moment that was perfectly delivereed. The guy playing John was great as well, at being completely horrible. John also had a lot of funny moments, just because he was such a laughable person, and he pulled them off really convincingly, right down to the way this guy always hung his head and stooped.

Just to warn you, if you are the type of person who can’t stand to see families arguing constantly, don’t see this film. That’s basically what it consists of. However, if you like this sort of thing, then you have to see this film. The manuevers are all so intricate and interesting that I could not take my eyes away. It was really entertaining to keep track of who was in the lead in terms of getting what they want, and it went back and forth quite a bit. Kind of like sports except way better because it has dialogue. Things get more and more involved as they go on, so I was drawn in more and more as the film went on (always nice). You never really find out how things come out in the film, because they just show the family over Christmas. We looked it up while watching because we really wanted to know and apparently Richard became king first, and then John became king when he died. Everybody wins! Except for Geoffrey of course, but he doesn’t really count. I don’t know how much of this is actually true, but I’m guessing most of it is made up because their record keeping was probably not so great in 1138. But the characters were all real people, so that counts for something I suppose.

The Lion in Winter is a real fun movie, especially if you like strategic arguing. Peter O’Toole and Katherine Hepburn are great here, which I’ll admit is the main reason I watched this in the first place. Everyone and everything else is great too though: the acting’s all good, the music’s good, the sets are cool, and the dialogue is amazing. You really can’t lose here. Well, unless you don’t like a lot of arguing, but if you do you’re in for a real fun ride. Sit back and revel in the carnage.

“I’ve snapped and plotted all my life. There’s no other way to be alive, king, and fifty all at once.”

9 responses to “The Lion in Winter”