So this really didn’t turn out to be a weekly thing after all. I guess I don’t really do enough rewatching every week, or at least not last week, to do a post on. So maybe this will be more like biweekly, but we’ll see as we go. Most likely it will just be completely random. For now, we have two films from last fall: Skyfall and Anna Karenina. 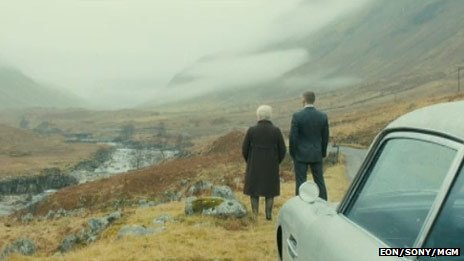 I was really happy to see Skyfall again. This time around I was trying harder to figure out why the cinematography was considered so good, but I’m still having a hard time judging cinematography so I didn’t get very far. I do know that lighting plays a big part and the lighting was really cool, especially when they were in Shanghai. One thing I did notice though, was how good the music is. I remember thinking around Oscar prediction time that there wasn’t a lot of good scores last year, but I could not have been more wrong as Skyfall and Anna Karenina both really impressed me this time around. So I take that back. I also caught that Bond girl who dies’ name this time, it’s Severine if anyone cares. I remember reviewing it the first time and going “dang it what was that chick’s name?” and then I was wondering if they actually said it in the film and it turns out she does introduce herself. I had also forgotten that when Silva flies in with his helocopter to take everyone out he plays some really loud music. It’s not “Ride of the Valkyries” like in Apocalpse Now, but it reminded me of it. The scene that is, not the specific song. Also, I’m pretty sure Q has the same laptop as me except his is black (it’s the same brand at least). And finally, I love how Mallory repeated the “carry on” line that James Bond had earlier. I thought that was so cool; it reminds me of those “Keep Calm and Carry On” posters and it just seems really British.

I probably should have been watching a math movie (it was pi day) or something, but unfortunately I didn’t. I watched Anna Karenina instead, and boy I was way more depressed by it than I remember being the first time. I’m not really sure why it was more depressing, but I just did not feel to good about it when it was over. The first time, I was confused by the whole setting the movie in a theater thing, and I think what I originally thought is still pretty accurate. The thing is, the very ending to this thing (spoiler alert) where Karenin is reading while the two kids play outside, is really strange and it doesn’t fit. First, why would Karenin be outside if being outside signifies naturness and sponteity? He wouldn’t, because he always adhears to the rules of society, or at least tries his best. And then outide turned out to be inside the theater after all, making me question whether that happened throughout the whole film or just in that scene. Wait! Maybe people are only shown inside when they’re feeling trapped by society, when they are forced to play the roles they are given? Anna’s dead, so Karenin doesn’t really have his problems anymore, he can just sort of hang out and be himself, which happens to be exactly what society wants, so that’s why all of that grass can exist inside the theater. Society and nature existing together. When you think about it that way, it’s a pretty happy ending. I found it hard to try and keep track of when everybody was outside and when everybody is in the theater, at some points it was obvious but not always. Whatever they were trying to do there, they should have made it more clear. They were doing great in the beginning with it, but I feel like as the film went on they slacked off more and more, until the end when the whole thing just got really confusing. It’s clear I will have to see this one again, so look for it in about six months. As I said above, I did really appreciate the music in this one. It’s still in my head actually, and I thought it was cool how they showed a guy playing the oboe when they were changing the sets in the beginning. They really should have kept that up, because it was just so interesting to watch.

Anna Karenina was still confusing in terms of how they handled the theater/outdoors aspect, but I was able to come up with yet another theory about it; Skyfall was still as fun as the first time, but I still don’t know what cinematography is unfortunately. The music in both films really impressed me this time around, forcing me to take back that thing I said about the music in 2012 films. I was wrong! I also have a regret about this week; I was planning to rewatch Psycho in celebartion of Hitchcock Day (Tuesday, the twelfth), but unfortunatly I didn’t get around to it. I’ll probably do it next week though, if not the week after…