The Sting is a movie about a big revenge con during 1930s. The style of the movie pulls you right into the time period, and most importantly it pulls you into one of the best things about that time period that you see in films: fast-talking and fedora-wearing con men, gangsters, and cops. It’s one of my favorite types of movie, and The Sting is a prime example.

Luther Coleman (Robert Earl Jones), Johnny Hooker (Robert Redford), and Joe Erie are small-time con men in 1930s Chicago. As the film opens, they take this guy working for mobster Doyle Lonnegan (Robert Shaw) for all he’s got. Too bad it wasn’t just his to loose. They are thrilled with their big score, that is until they find out it was actually Lonnegan’s money. Lonnegan is a “guy who would kill a grifter over a chunk of money that wouldn’t support him for two days,” and our boys took a lot more than that. Luther ends up bearing the brunt of Lonnegan’s wrath, and that’s puts Hooker in double position of a man out for revenge and a man with a target on his back.

Before Lonnegan’s guys caught up with him, Luther told Hooker to see a guy named Henry Gondorf (Paul Newman) who would teach him to play the big con (go after bigger marks and make more money). Gondorf agrees to help Hooker with his revenge con against Lonnegan, being a friend of Luther’s. They put together a gang and a very complicated con (even after seeing the movie like a bazillion times I’m not sure I could explain it very effectively). It involves so many double crosses and plot twists; I guarantee you will not see the end coming. 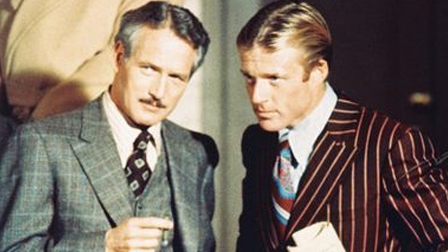 The plan involves several deceptions and manipulations, but I’m just going to focus on some of the individual scenes and players without bringing them together. That’s for the film to do. One phase of the con involves Gondorf pretending to be drunk and then obviously cheating Lonnegan at poker. This part is really hilarious, and yet tension filled at the same time. We’re worried for Gondorf; Lonnegan is a very formidable opponent. We’re worried that he’s going to be discovered, but the brilliant thing about the plan is that we want him to be discovered in part at least. It’s important that Lonnegan knows he’s been cheated, because that’s going to rope him into the second part of the con.

The second part revolves around horse racing. Suffice it to say that they are going to trick Lonnegan into betting on the wrong horse and loosing a lot of money. They craft a betting club, hire a ton of actors to populate it, and devise a tricky signalling system to communicate between buildings. Lonnegan again figures out he’s been cheated, but not to depth that Hooker and Gondorf cheated him. They bring in the cops for this final deception and they pull it off perfectly. It’s really cool to see everyone drop character once Lonnegan leaves the room.

I’m not sure if the amazing cast trumps the twisty plot or the 1930s time period, but it might. We have Robert Redford and Paul Newman back together again, and they are as great together here as they were in Butch Cassidy and the Sundance Kid.  Newman’s Gondorf is the more responsible one, keeping Redford’s reckless Hooker in check. The great part about this is that it gives yet another dimension to the story, which already has about a million layers. While Lonnegan has about three people chasing down Hooker, the cops are also after him, and Gondorf has someone keeping an eye on all of them. He understands Hooker really well, more than Hooker thinks he does. 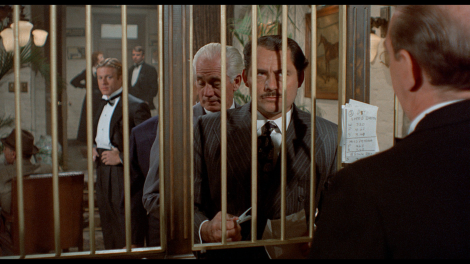 Robert Shaw is always a great villain, and his performance as Lonnegan is no exception to that rule. Even though Lonnegan is getting played the whole time and doesn’t know what hit him, Shaw still makes him a force to contend with. Even though we have faith in Gondorf and Hooker, we also have faith in Lonnegan, we never underestimate his power to retaliate. That’s hard to pull off when you’re playing a guy who’s getting taken for everything he has. Another clueless bad guy is a young Charles Durning as Snyder, one of the cops who’s chasing Hooker. He has no clue of the larger machinations at play here, but he goes after Hooker and gets taken in just as Lonnegan does. And even though he seems slow (“If Snyder knows, everybody knows. He never gets anything first!”) that doesn’t stop him from banging people’s heads around when he does catch up with them.

Another star here is the soundtrack. It makes use of old ragtime tunes, such as Scott Joplin’s ever popular “The Entertainer.” According to reliable sources who were alive at the time (aka my parents) this movie totally brought that song back. It fits the film’s style perfectly, even though ragtime has been around longer than the 1930s. The style, as I already mentioned, is great. Everyone’s wearing suits and fedoras; I’m a big fan. The buildings are all really old-timey and grungy in the poorer parts of town. The dialogue fits the time period perfectly and is also one of the highlights of the film.

The Sting has so many great aspects. The multiple plot twists that you never see coming, the characters and the actors that play them perfectly, the soundtrack, and the classic 1930s style. The Sting hit a homer in 1973, winning seven academy awards for art direction, costume design, directing, editing, music, writing, and most importantly best picture. It was also nominated for three more: cinematography, sound, and Redford for lead actor. The Sting is definitely a worthy choice by the academy. 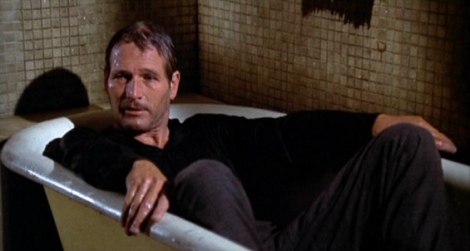 “How do you wanna work this, flat rate or percentage?”
“Who’s the mark?”
“Doyle Lonnegan”
“Flat rate.”

10 responses to “The Sting”