Dial M for Milland, I think you mean! I’ll admit, Ray Milland in the lead was my primary motivation for seeing this film, besides it being one of Hitchcock’s. Dial M for Murder is a decent film, but just to warn you it’s pretty talky. I generally like talky films, and this was too talky even by my standards.

The film starts with Margot Wendice (Grace Kelly) obviously having an affair with an American crime novelist named Mark Halliday (Robert Cummings). Margot tells Mark about someone is blackmailing her with this information; Mark wants to tell Margot’s husband Tony (Ray Milland), but Margot doesn’t want to because he’s been so much nicer to her lately. They are then interrupted by Tony himself, so they don’t get to decide on the issue. They are all supposed to go to a play or something, but Tony makes the excuse that he needs to work and sends them on their merry way without him.

This is when things get interesting. Tony invites over this guy he knew from college, Swan (Anthony Dawson), supposedly to buy his car. Really, he wants to pressure him into murdering his wife. He reveals how financially dependent he is on her, how he knows about the affair, and is worried that Margot will leave him and take her money with her. This is why he’s been so nice to her, but who knows how long that will work. He blackmails Swan into murdering Margot the next night. 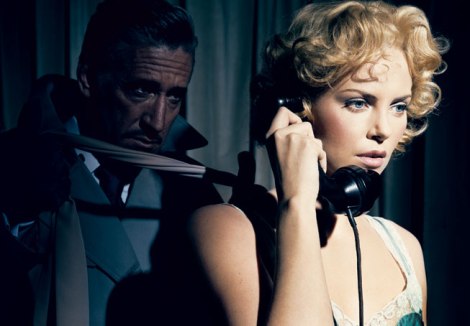 Tony’s plan is fairly complicated, but suffice it to say that he’s going to call (hence the title of the film) and Swan is going to strangle Margot as she is answering the telephone. The plan does not go as planned. There are many obstacles for Tony in setting up the plan for Swan, but he manages to improvise a bit and set everything up for him. This doesn’t make much difference as Swan messes up his half anyway. Margot is able to reach her scissors while Swan is trying to strangle her, and stabs Swan to death in self defense. This leaves Tony with a problem, and to cover up his involvement in the attempted murder, he tries to make it seem as if Swan acted on his own. The way he does this makes it appear as if Swan was blackmailing Margot, which then gives Margot a pretty strong motive. Conveniently for Tony, she is sentenced to death. However, one of his mistakes will end up saving her.

The best thing about Dial M for Murder in my opinion was that I could get behind both of the main characters at once. I wanted Tony’s plan to succeed and at the same time I wanted Margot to live. Of course, those two things are mutually exclusive and somebody had to lose. But that really created a moral dilemma for me, and kept me interested in the outcome. 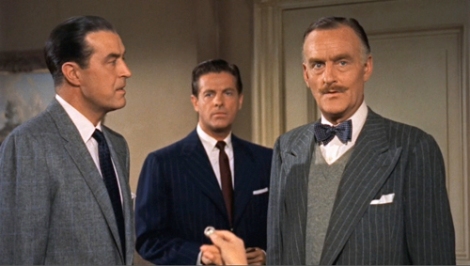 As I said before, I think this film is really talky. I learned from the credits that Dial M for Murder was adapted from a play, so that probably has something to do with it. Usually I’m fine with talking; in fact, I generally prefer it to action. There was some action during the attempted murder/self defense scene, but that was about it. The problem for me was what the talking was about; it was either explaining detailed plans or idle everyday talk with murder scheming underneath it. There just wasn’t much emotion it in. While there was the tension of Tony trying to get all of his designs to come together, it wasn’t enormous or overwhelming. After a while it was just more of the same.

The English accents that Milland and Kelly used sort of put me off at the beginning. At first I just thought they were trying to sound pretentious or something, but then it became clear that they actually were supposed to be British. I got used to it after awhile, and actually quite liked it by the end. This got me wondering if either of them actually were British, and they’re not. Kelly was American and Milland was actually Welsh, so congratulations to them on not overdoing the British accents. 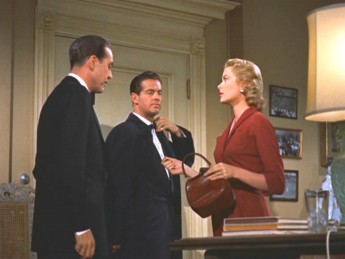 I am happy to say that Grace Kelly did not annoy me in this film at all! I can’t really put my finger on it, but she had me really annoyed in other films of hers that I had seen. Not that I really thought she was a bad actress or anything; she had just really bugged me for some reason. She did a perfectly fine job in this film, so I don’t know what my problem was. Of course, I had originally wanted to see this for Ray Milland, who I had loved in The Lost Weekend. Though his performance here didn’t really live up to that one, I hadn’t really expected it to seeing as that was his most famous role. Like Kelly, he did a perfectly fine job. What especially stood out to me was that he was able to appear very concerned over details of the murder plot and at the same time very unconcerned with ending his wife. Very selfish, and very creepy.

I didn’t really say anything about Hitchcock’s direction because it didn’t really stand out to me. I usually like the films where I can tell what he’s doing more, and unfortunately this didn’t seem to be the case here. There were times when he would focus on a specific object because it was the detail of the plan that Tony was concerned with at the time, but other than that I didn’t really notice anything. Dial M for Murder was a perfectly good film, with solid performances, but Hitchcock’s definitely done better.

“Highly irregular, of course, but my blood was up.”

4 responses to “Dial M for Murder”