Mildred Pierce is a 1945 film adaptation of James M. Cain’s novel of the same name, directed by Micheal Curtiz and starring Joan Crawford. Those are some pretty big names, and they pretty much sum up my motivation for watching this film. Other than that, all I knew about it was that Crawford had won Best Actress for her performance as Mildred, and it was a mother-daughter type thing.

Man, oh man, is this a mother-daughter type thing. It’s not a film I’d break out on Mother’s day for my mom and sister, that’s for sure. Mildred’s not a saint, and her daughter’s even worse. Those two were made for each other.

The film opens with a man getting shot (and taking way too long to die, I might add). The way Mildred acts in the following scenes made me sure that she killed him. She later gets picked up by the police, and they are just about to let her off the hook with no questions or anything, but she just can’t help herself I guess. They point the finger at her ex-husband, and since she knows he didn’t do it, she feels she has to tell her whole life story to defend him. 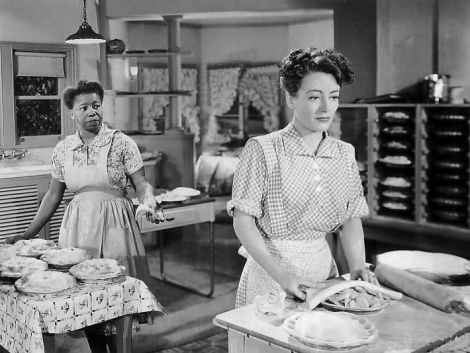 Sorry for the sarcasm, but this telling of her whole life story to clear her ex-husband was especially mystifying to me. Once the flashback starts, we see that said ex-husband, Burt, was cheating on Mildred before they divorced. We also see that Mildred is a pretty tough lady, she starts a restaurant chain nearly single handedly. We see her pain dealing with her spoiled daughter Veda constantly. Mildred’s tough, she’d have to be to go through all that. So why would she just forget this toughness the second that her EX husband is accused? Well, one reason is that they kept on pretty decent terms after the divorce, and another is that Mildred doesn’t much care about herself.

She always puts her children before herself. Once her younger daughter Kay dies, she becomes even more attached to her eldest, Veda. Veda’s a piece of work, I’ll say that. She always has to have everything she wants, exactly the way she wants it. That’s really the only reason she loves, or says she loves, her mother, so she can bleed her dry. This chick spends so much money I cannot even…. She’s also very class oriented.  When she finds out her mother took a job as a waitress after the divorce, she brutally insults Mildred for degrading her. Yes, for degrading her. Putting aside for a moment that going to work to support your family is never degrading, Veda doesn’t even think for a moment what her mother’s gone through to make her happy. She only cares about what she’s going to look like when people know her mother is a lowly waitress. She can never get past it either; even when Mildred is very successful and wealthy and owns a giant chain of restaurants, she doesn’t care. Mildred is still low class with no family background, and she’s holding Veda back.

Veda’s view of the world is just so warped, you have to wonder where she got all of this. Well, to be frank: Mildred. From day one Mildred was so determined to provide for Veda and to give her the things she never had, she over-provided. Veda accuses her mother of this, saying “you made me the way I am.” And even though Veda is a despicable person and Mildred is a million times better than her, I can totally see it. Everyone in the film basically hates Veda, and everyone knows that Mildred always spoiled her. But as with all spoiled children, they eventually get themselves into something that Mommy can’t fix.

I can really see psychologists digging Mildred Pierce. The nature vs. nurture debate is at the heart of this film. Even though it appears that all of Veda’s shortcomings are the result of her upbringing, sometimes you get the idea that she was just always like that. She was always just a terrible person and there was nothing Mildred could have done but give in to whatever she wanted. It’s a fascinating concept, and while the film doesn’t really slam nature vs. nurture in your face, it’s behind everything Veda and Mildred do.

One thing I will say though, as far as I can tell, Crawford totally earned that Oscar. I haven’t seen any of the other performances from that year, but Crawford completely nailed hers. What I found particularly impressive was how Crawford used her facial expressions to convey her emotions. I feel like I normally pay more attention to how actors or actresses speak their lines, but we were shown Crawford’s face a lot, so I couldn’t not notice. As I was watching the film I remembered George Lucas in commentary for Star Wars III (I believe) saying how he was trying to show emotions through the characters faces instead of dialogue in this scene of Anakin looking out  of a window with the evil eye, and I was just like “it’s him looking out of a window, big deal.” Now I know what Lucas was going for. Should have had Joan Crawford play Anakin.

Mildred Pierce is a high quality and highly entertaining film. I’m not sure whether to classify it as a chick flick or not, but if it is, it’s a chick flick in a good way. It may be a bit melodramatic, but it’s to be expected considering how over the top Veda is. The only reason I might classify it as a chick flick would be because it is primarily about women, but there are men in the film as well. They do not drive the action though. I would still suggest this film to any classic film fans, psychologists, or film noir fans. If they happen to be men, so be it.

“With this money I can get away from you.”